A nightmare journey in Turkey, brought this rich and wonderful chickpea and sausage (suçuk) soup into my life. Learn how to make this flavour and textural treat… 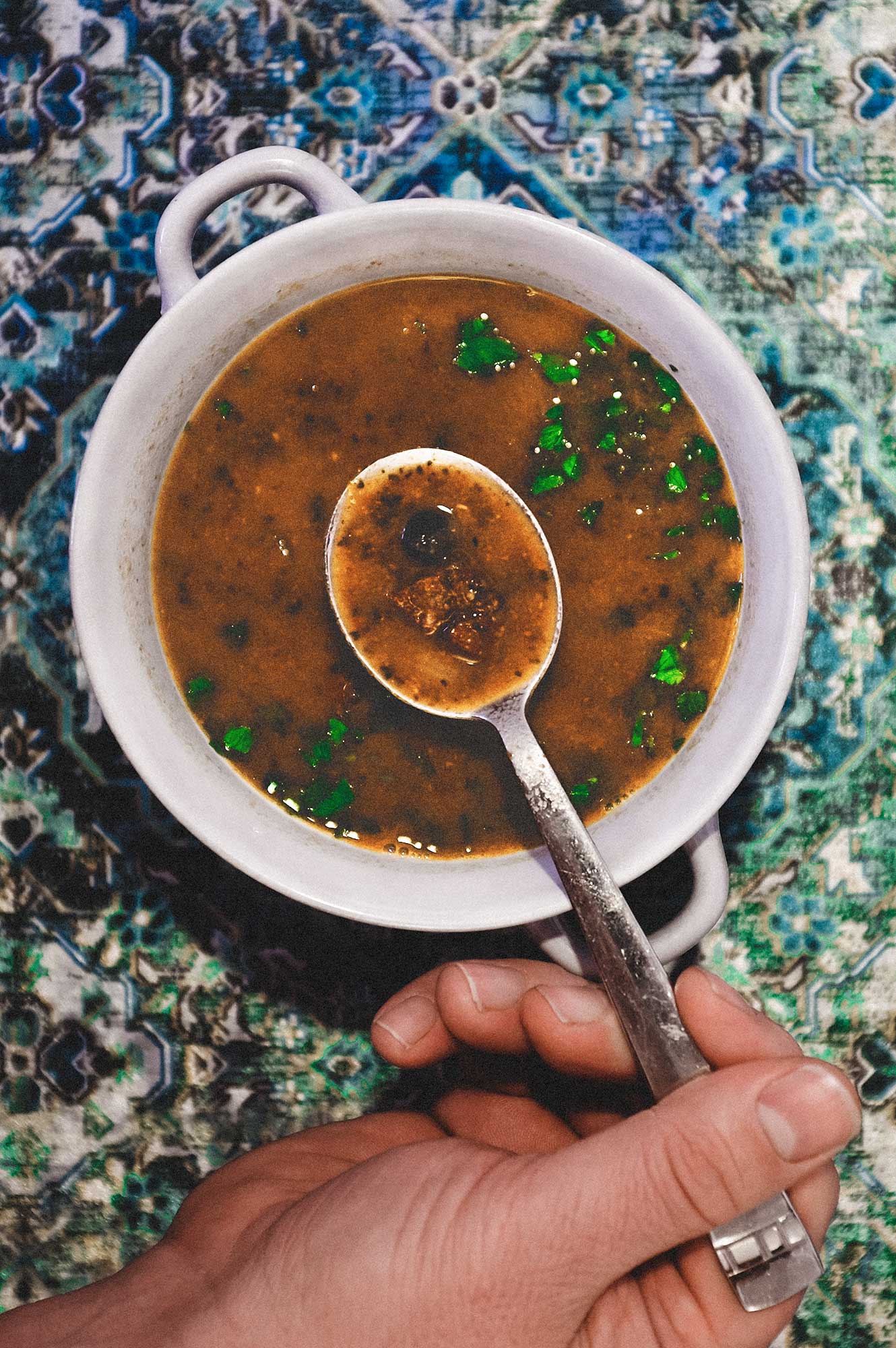 This Turkish Suçuk & Black Chickpea Soup is typical of many versions I sampled while travelling around Turkey. It was winter for the the month I was there, so every town I passed through had some kind of bean or lentil soup on offer for shivering arrivals.

In one such trip, to the city of Konya, in Central Anatolia, I'd just arrived after an excruciating 4 hour coach journey. I'd been instructed to "take off your headphones and watch the entertainment" by the burley stewardess - I wasn't going to argue. The entertainment consisted of a sole TV show, looping every 30 minutes, which featured a (supposed) Turkish comedian. It ran at full volume, and played through what I can only describe as two tin-can loud speakers for the entirety of the journey. Everyone was laughing. I was not.

By the time we reached Konya i was in no mood for anything or anybody. I made a bee-line for the first restaurant I could see. I found a tiny place where a woman sat in the window, flipping thin breads on a large metal domed pan. She smiled warmly as I entered and I knew I was going to be OK.

I ate so much in this place. Breads with Za'atar, tiny lamb stuffed Manti with yoghurt and chilli butter and hearty lamb kofta in a pool of buttery sauce over pureed beans. But the meal began with this - a small bowl of sausage (sucuk) and chickpea soup.

Suçuk is the Turkish version of a sausage found all across Europe, the Baltics and Central Asia. It's a semi-cured beef sausage, typically spiced with cumin, Aleppo pepper and paprika to give it a strong, robust taste. Suçuk is used on lots of dishes, such as Turkish Pide (Turkey's answer to pizza), or as a delicious hearty breakfast with fried eggs.

For something so humble the soup packed a flavour-laden punch. It was spicy but not chilli-hot. Notes of cumin and other warming spices came through. It was creamy and rich and filled my entire soul with a smile. The bus journey faded further into the distance with every slurp.

At home, I've recreated this soup using the authentic Turkish suçuk, but have replaced regular chickpeas with some black chickpeas. I also remember there being some kind of dark leafy vegetable like a Silverbeet in the Konya version which I didn't have this time. Nevertheless, my version was actually really delicious! The suçuk has so much flavour itself, that there's not much need for anything else to flavour the soup - it's sweet, earthy and very satisfying. Well worth a painful bus ride for.

How to make my Turkish Suçuk & Black Chickpea Soup

Did you make my Turkish Sucuk & Black Chickpea Soup?