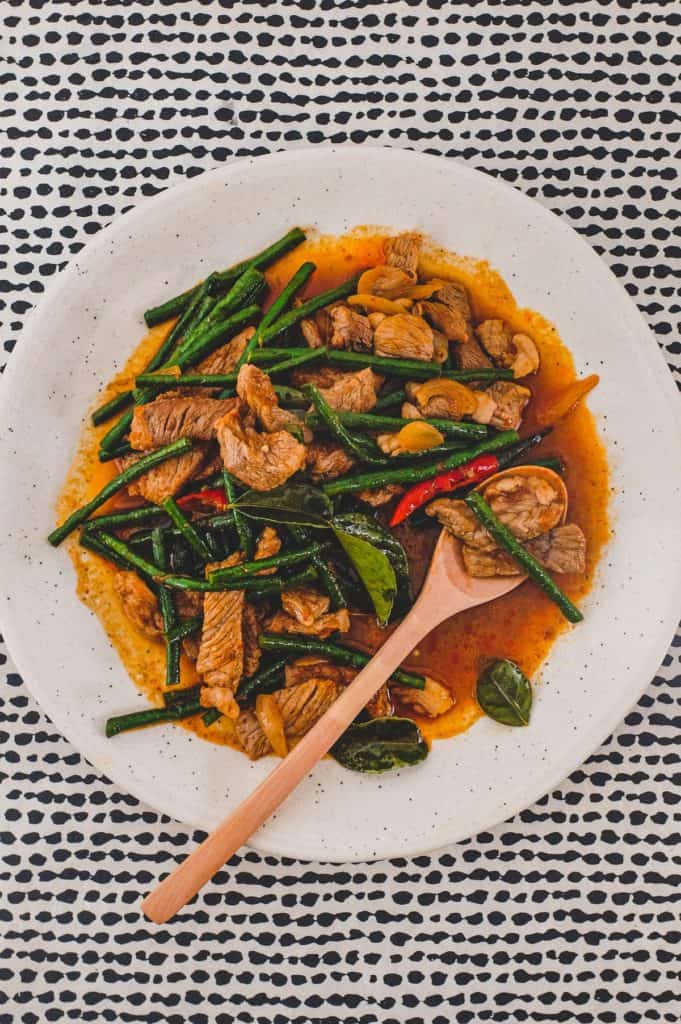 For a fast, intense burst of Thai flavour, Pad Prik King is just the ticket. Rich in the four quintessential flavour profiles of sweet, salt, sour and spice, the chilli stir fry with beef delivers it all in abundance. Learn how… 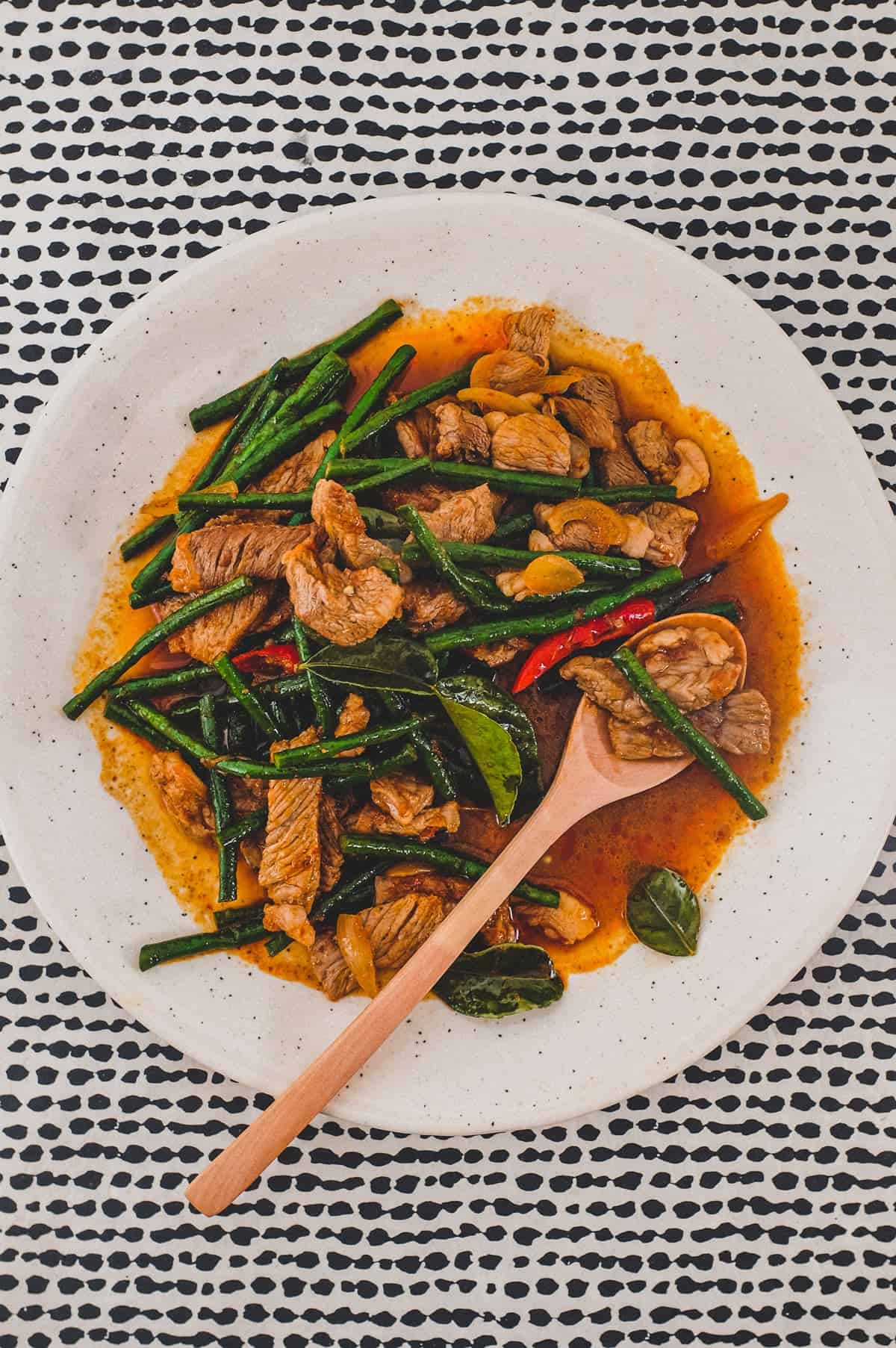 Pad Prik King (often called Pad Prik Khing) is one of my most favourite Thai dishes. A quick, stir-fried dish that brings all the essence of Thailand into every delicious mouthful. Unlike many Thai preparations, Prik King doesn't feature coconut milk – instead of being a creamy, rich sauce, the liquid is mostly minimal and the dish is typically (but not exclusively) a dry one. Personally, for my Prik King recipe, I like a little sauce to flavour the rice, so will add as much water as I'd like sauce (about 1 cup). 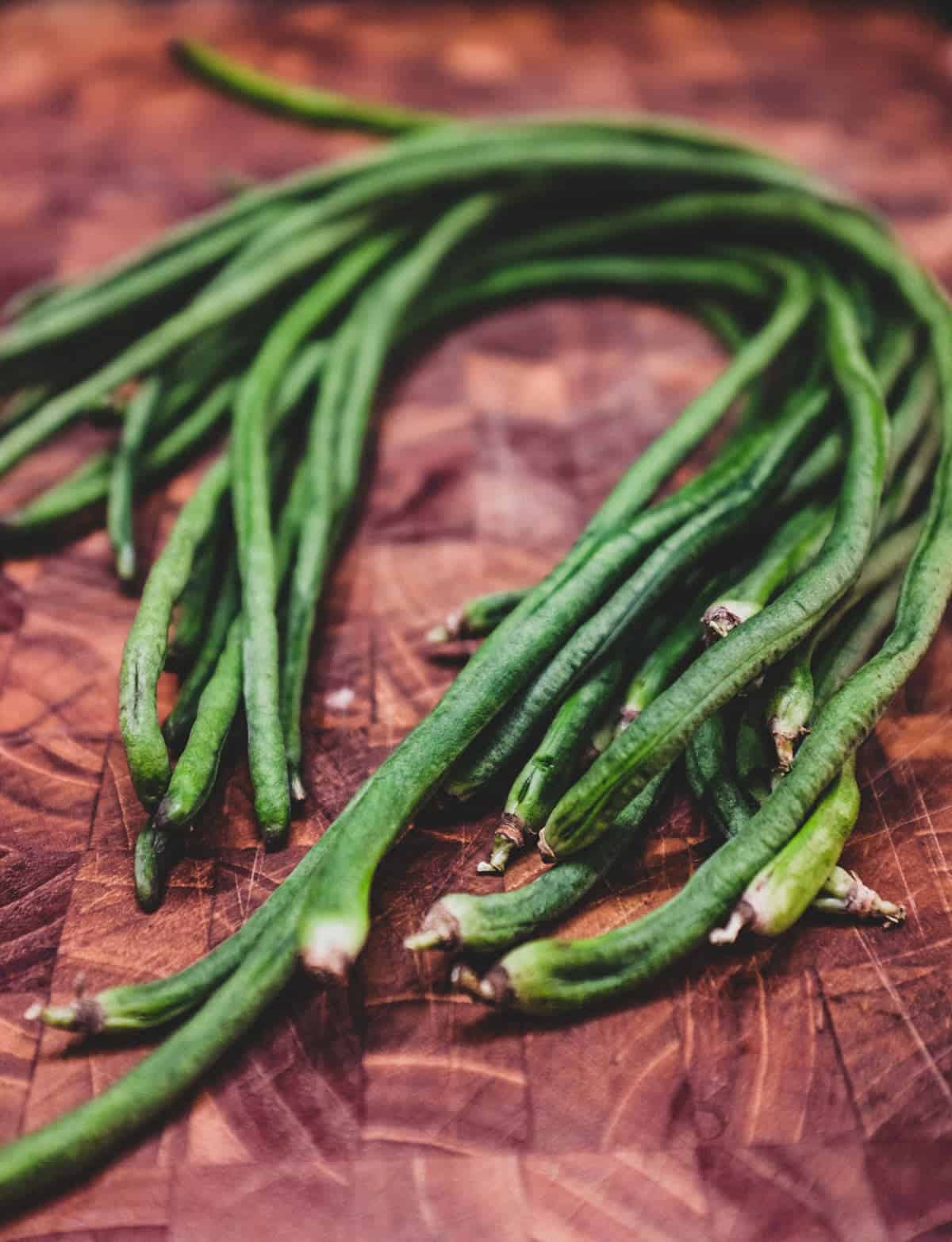 Usually, a Prik King recipe includes the long beans called 'snake beans' (also known as yardlong beans, pea beans, long-podded cowpeas, Chinese long beans and bodi!). They are wonderful endless green beans that look just like vines – they have a similar taste to regular French beans, so substituting for those is perfectly acceptable. A Prik Khing is spicy (as spicy as you like) and intense and accompanied by a variety of proteins.

My recipe uses beef, but I'll make it with whatever I have on hand - pork, chicken, duck, shrimp and squid all make a great prik king. Indeed, a vegetarian version is often on my menu, I'll add double the amount of beans or include some fried tofu (or both) and it's pretty insanely tasty!

There's no shame whatsoever in buying a re-made curry paste for Thai food. While it's incredibly satisfying creating your own Thai curry pastes, buying shop bought is just fine, so long as you find a good quality paste. As you can see below, I ALWAYS have about 5-6 pastes in my store cupboard. 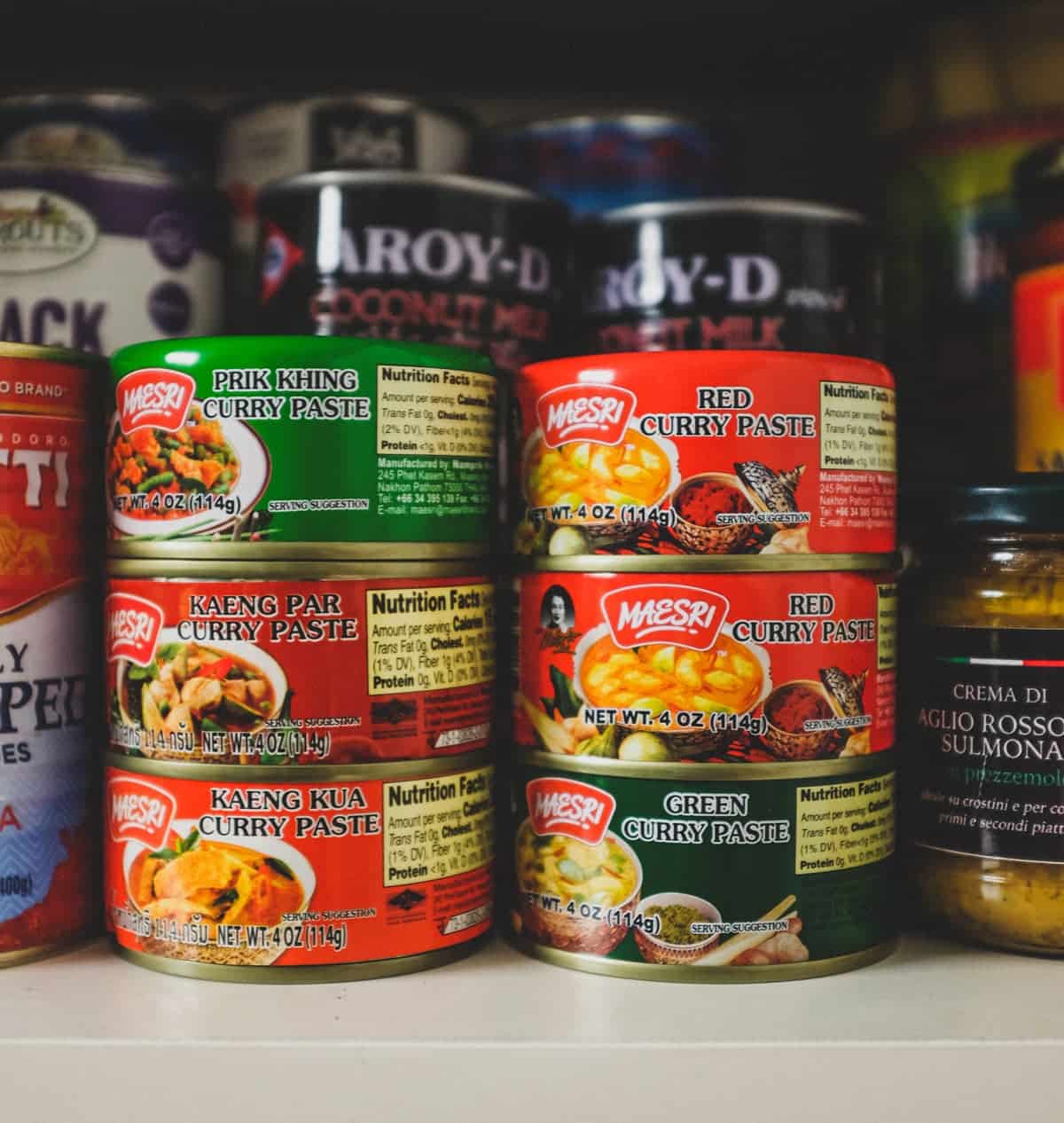 To find a good paste, you should visit a South East Asian food store and buy a good quality red curry paste for this Pad Prik King Recipe. My favourite brand by far is Maesri (I'm not even being sponsored to say this!) - their pastes (and there are many) are top notch, and will help you create the most authentic Pad Prik King.

In fact, Maesri also create a special Prik Khing paste that will give you the 'just like Thailand' flavour. If you can't find that, just buy any good red curry paste.

I have a homemade red curry paste recipe here if you're into the thought of making your own, and there are even more from-scratch curry recipes below if you're interested.

Once you're all set with a paste, the cooking of this is simple. The 'Pad' part of Pad Prik King means to fry, so all you need is a big, deep frying pan or wok and you're good to go. Pop the rice on and when that's cooked - you can start the Prik King. 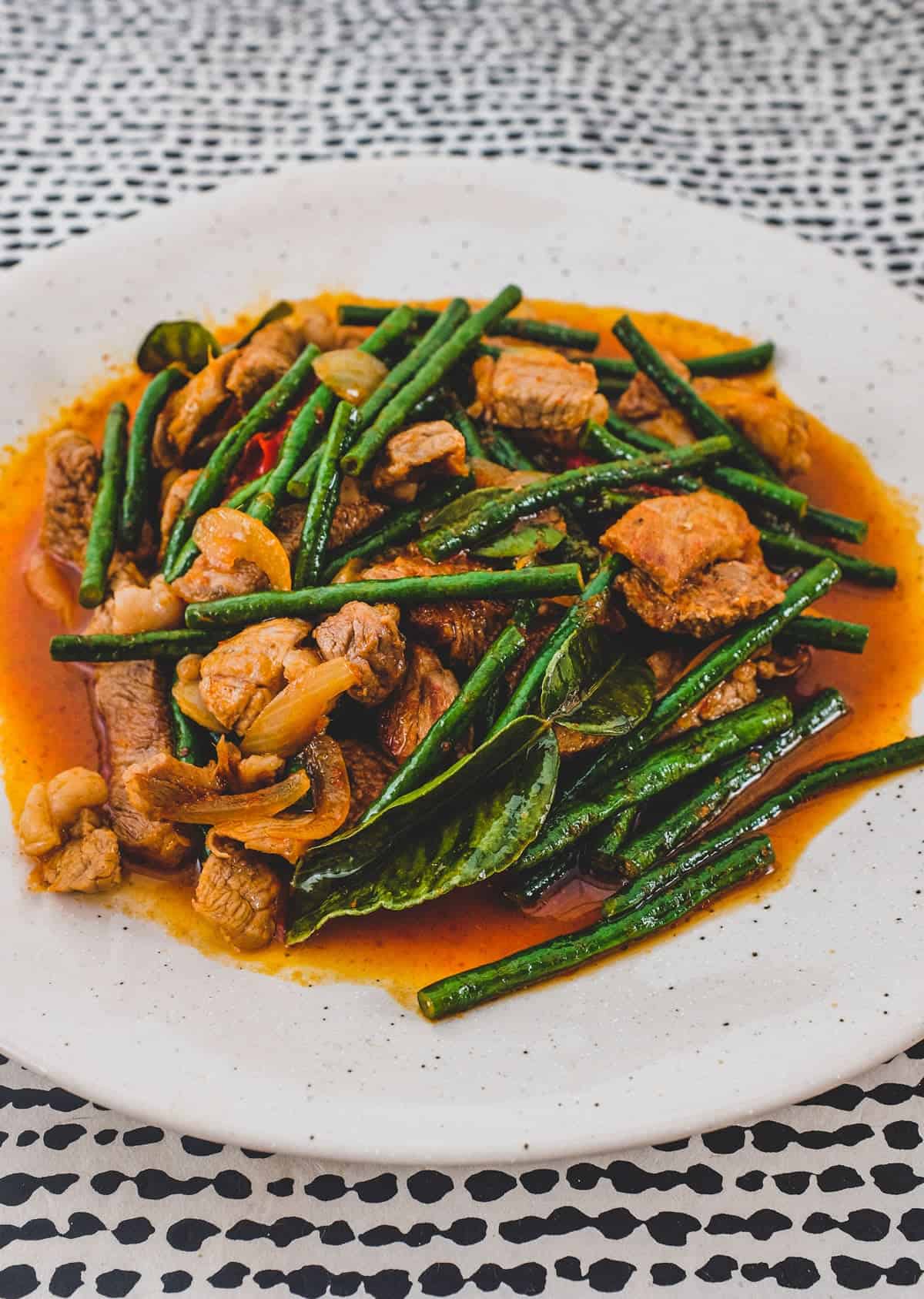 So! As you can see, once you have to key ingredients, the rest is super easy and super fast. You'll have your dinner on the plate in 20 minutes! That's much faster, and much tastier than a take out, right!?

Be the Khing of Thai food with this amazing Pad Prik Khing recipe. I hope you enjoy!

My favourite Thai recipes with home made curry pastes

How to make Pad Prik King 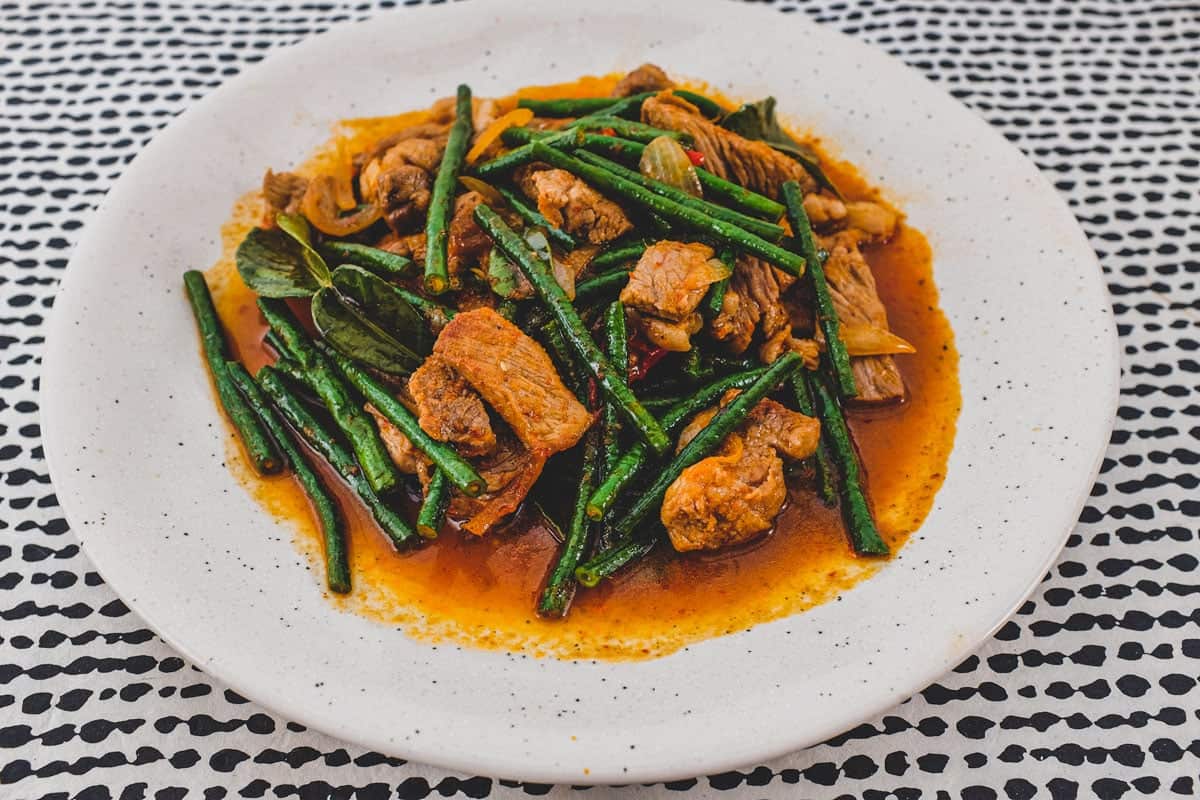 Did you make my Pad Prik King