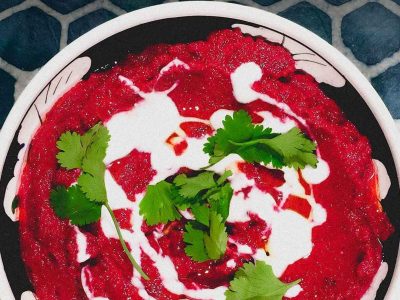 Turkey, a land of mezze – small plates to feed the soul. One such treasure is this vibrant salad/dip made from beetroot. It’s a dish with stand out – a triumph of flavour, texture and colour. It doesn’t get much tastier than this! 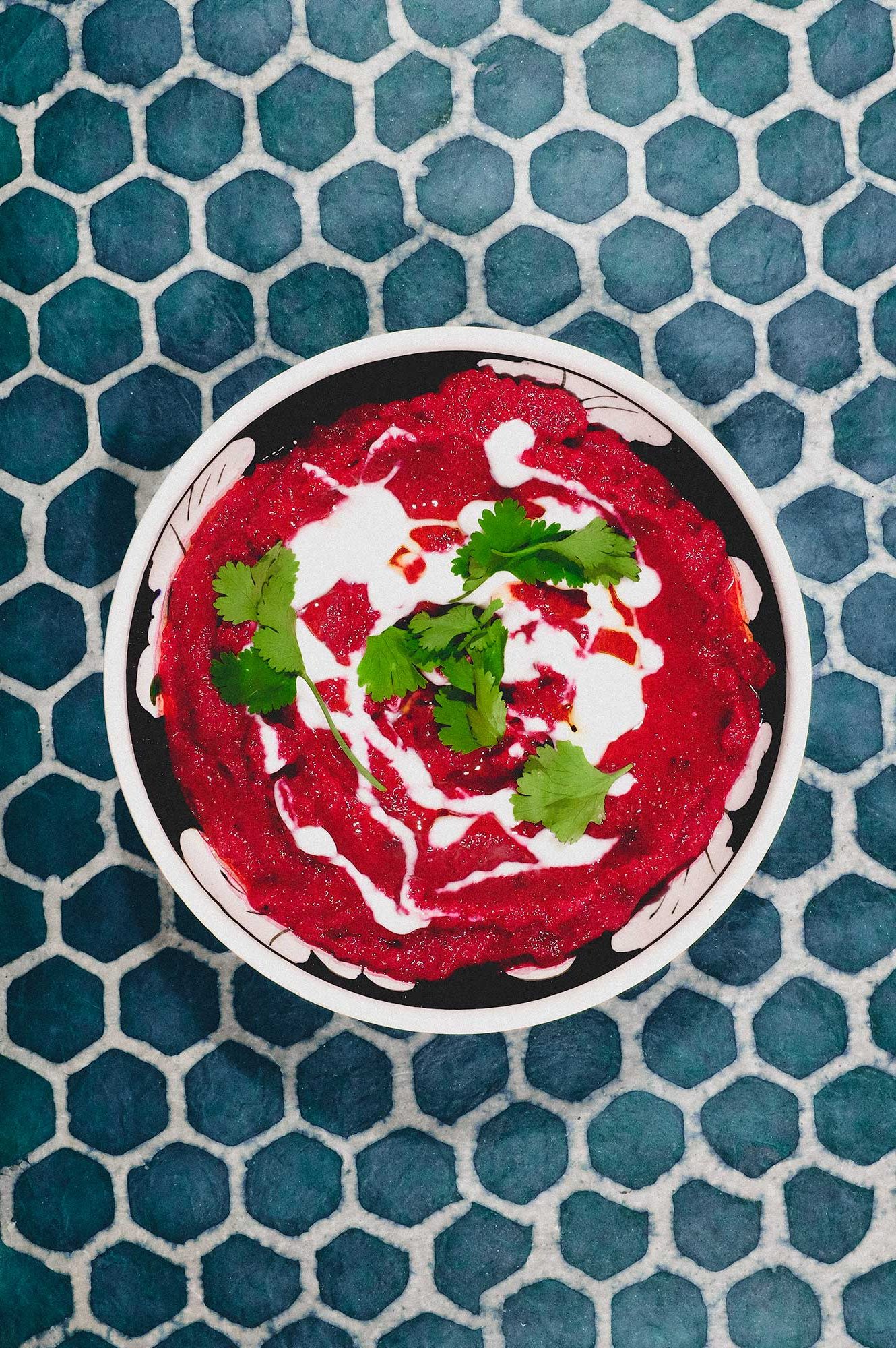 My Turkish Beetroot & Yoghurt Dip is a simple, delicious way to prepare this precious vegetable. Soft, creamy, sweet and earthy. Not to mention beautiful to look at! It's one of the best dip recipes in my repertoire.

It's a main stay on any Turkish Mezze plate - I ate copious amounts of this sweet, earthy dip in Istanbul - watching the World go by at many a restaurant. Once you take that first scoop with a flatbread, you'll drift into a beetroot trance only to suddenly come back to earth and wonder where the last 2 hours went, and where did all that Beetroot dip go to?

So why is it so delicious? Firstly, I love beetroot! The flavour, a sweet, earthy vegetable that's unlike any other. Force fed it as a child, I was never a fan - but I revisited this vegetable some time ago and happy I did. I can't get enough! Secondly, the combination of sweetness and light acid from the yoghurt is just phenomenal. Let's not forget about the colour. Beetroot will bring any dinner party spread to life with its shocking pink hues. It's a stunner.

If this dip (and beetroot in general) didn't leave my hands and kitchen in such a pink state I'd eat it for every meal. No matter what you do, or how ever many precautions you take - you'll end up looking like a toddler painting. I've actually given up trying to avoid the staining juice now - I always think I manages to find a way of leaving it's mark on something. I've lost count of the t-shirts and jeans it's given its unique batik effect to. Just embrace it.

Beetroot Dip - playing its part in a Turkish Mezze spread

In Turkey, and around the Middle East - dishes like this are served mezze style; lots of small plates served with flatbreads to aid in dipping, scooping and wrapping. A mezze spread can feature a two or three Turkish dips at its simplest, and as many dishes as you can feasibly stuff into your face at the other end of the scale. It's one of the best party dips while also being a great dish to have on a communal table alongside other mezze dishes - everybody gets as little or as much of the things they like the best - and get to try the things they've never tried. That sounds like the perfect dining experience, right?

As part of a spread, try this dish with other simple mezze recipes try my Turkish Carrot Salad or maybe the North African version Moroccan Carrot Salad, and then there's my delicious Turkish Bean Salad (Piyaz). It's also well paired with bread alongside a simple Turkish Garlic & Yoghurt sauce or an even simpler Onion & Sumac Salad. If you're pairing it with meat, use my Lebanese Marinade or from one of the Middle Eastern marinades at my guide to marinades. Try one of my delicious kebabs too... the Cypriot Sheftalia and the Spanish Pinchos Morunos would both pair perfectly. There are so many options for this versatile salad. It's quite literally 'unbeetable'!

How to make my Turkish Beetroot & Yoghurt Dip. 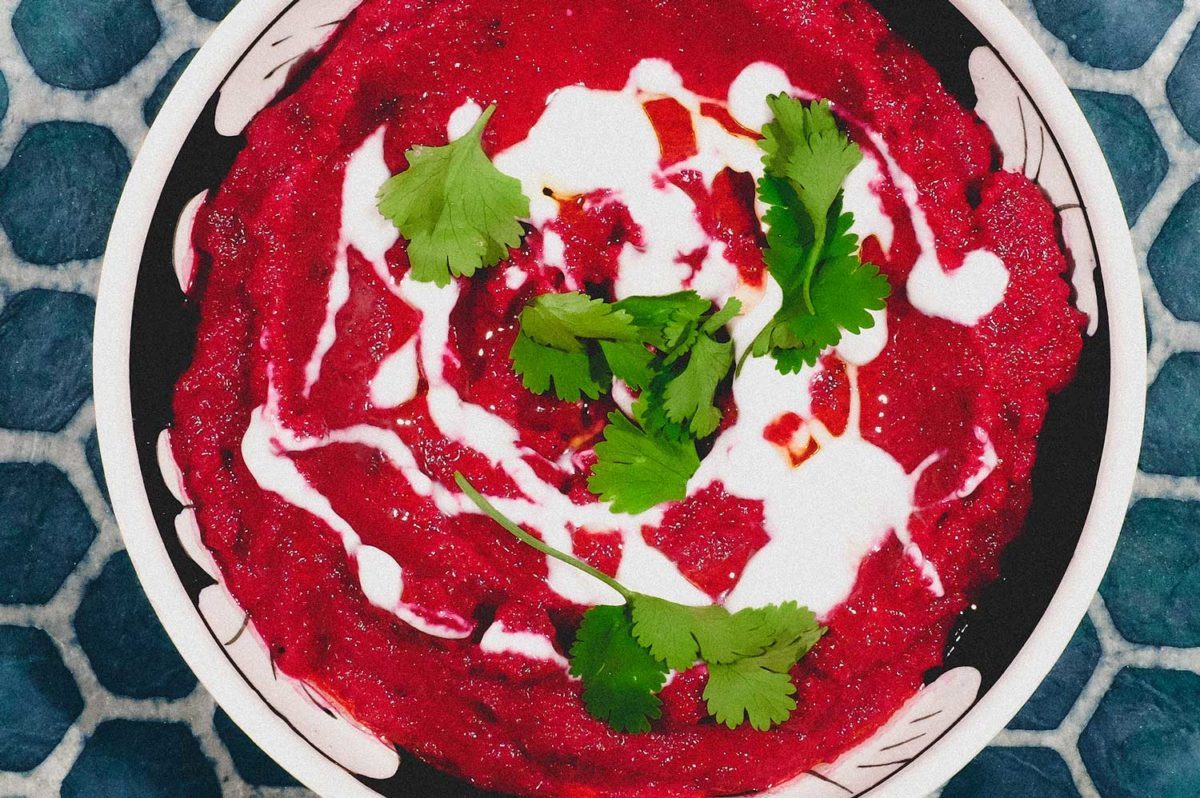 Sprinkle this salad with a little feta cheese for a perfect salty counterbalance to the sweet, earthy beetroot. Dollop a little of this dip over a platter of peppery rocket leaves and top with some lightly roasted walnuts or pine nuts for a simple, flavoursome salad.

Did you make my Turkish Beetroot & Yoghurt Dip?