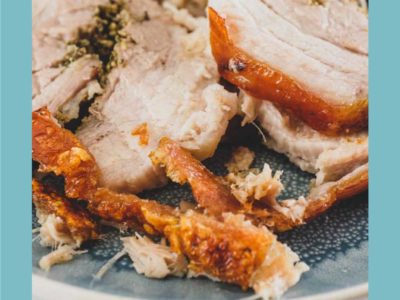 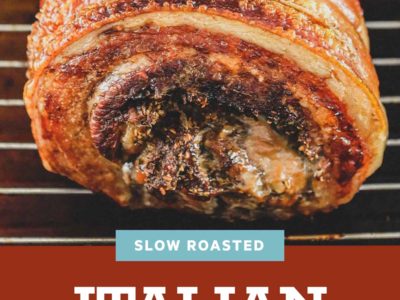 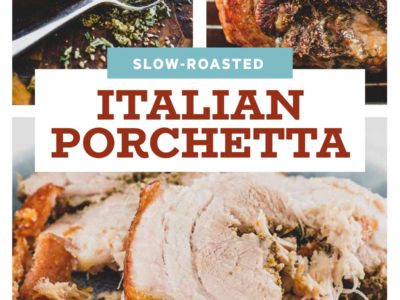 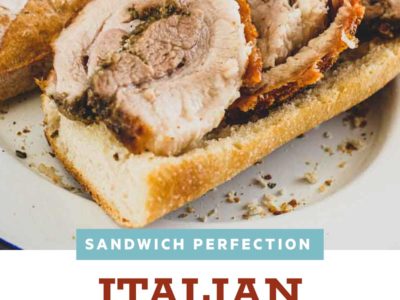 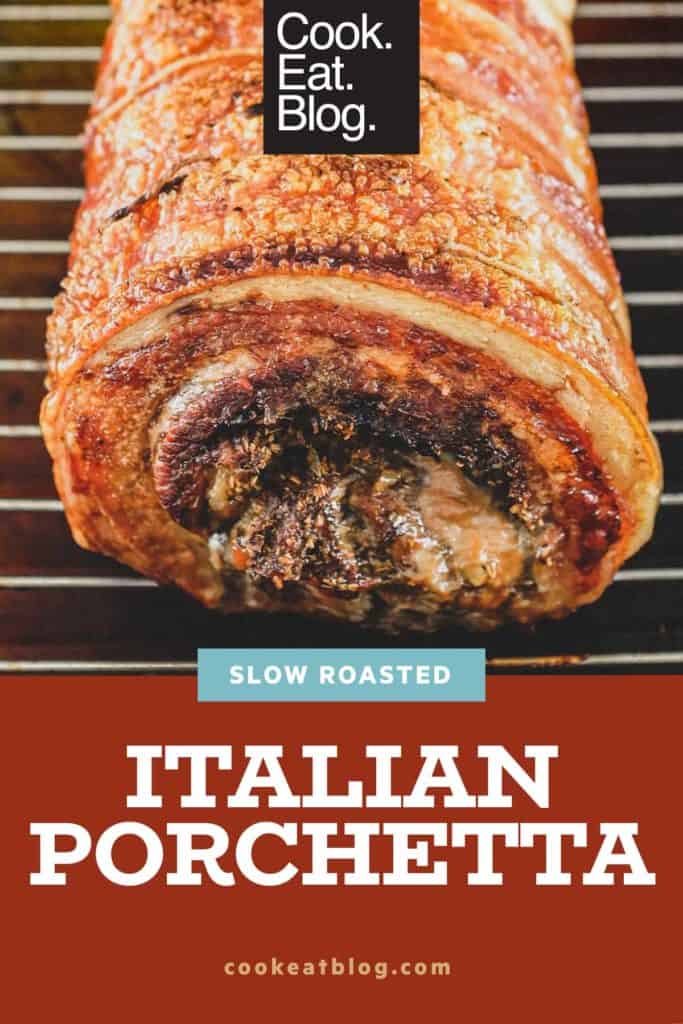 Rolled pork belly, stuffed with fennel, garlic and herbs is slow-roasted to perfection with the crunchiest skin. It’s one of Italy’s most glorious dishes and so far beyond delicious that there isn’t yet a word to describe… in either language. 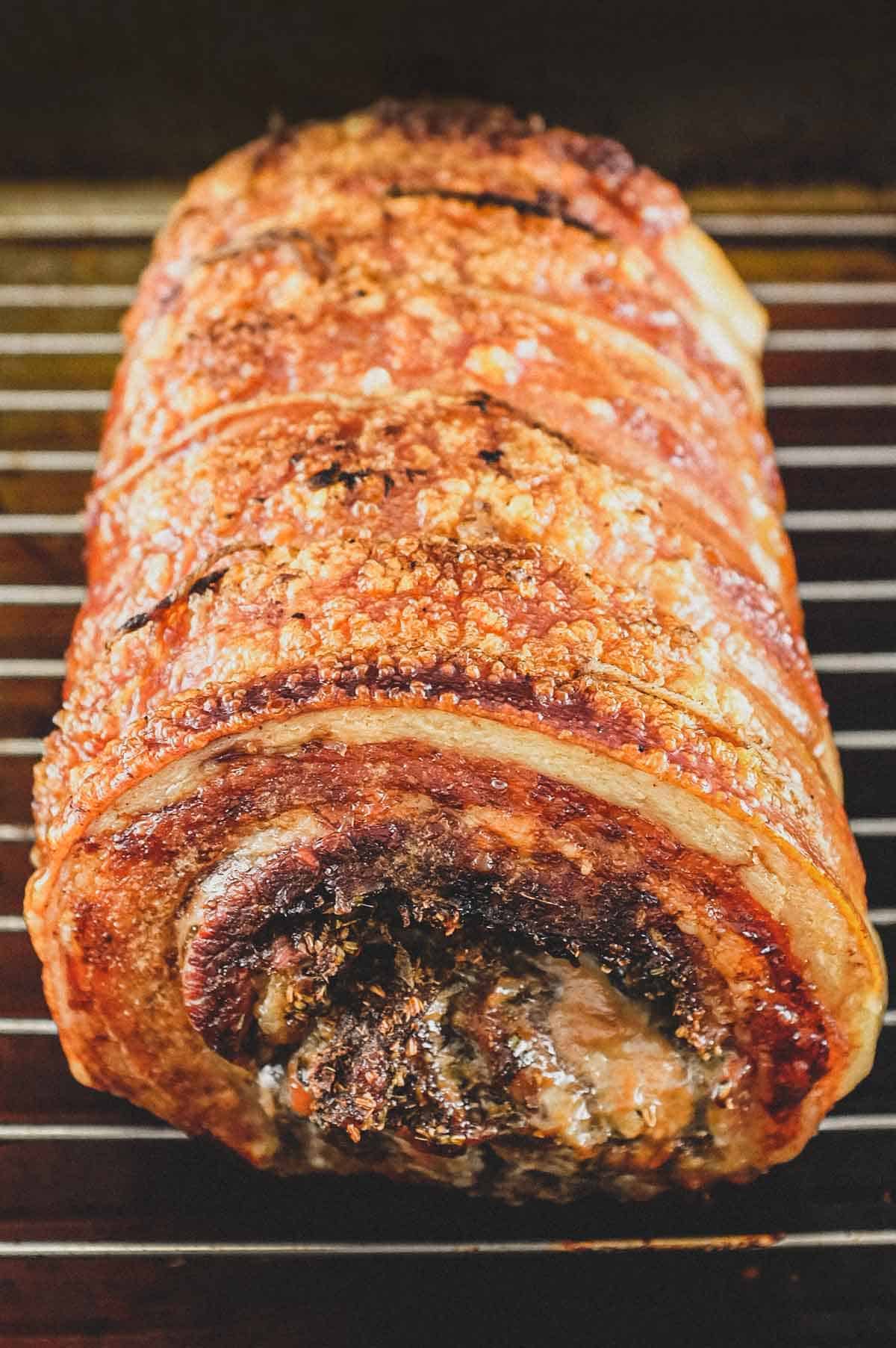 Italian Porchetta is in my opinion, one of the greatest Italian offerings. Pork, stuffed with herbs and garlic and slow-roasted to a thing of wonder. Porchetta originated in the Rome area but is now found all across Italy (and indeed the World). Traditionally a celebratory dish, but now very common as street food too. Many towns and villages have tiny shops dedicated to serving this and nothing else, a real destination! When in Italy, wherever I saw a sign, I was sold. 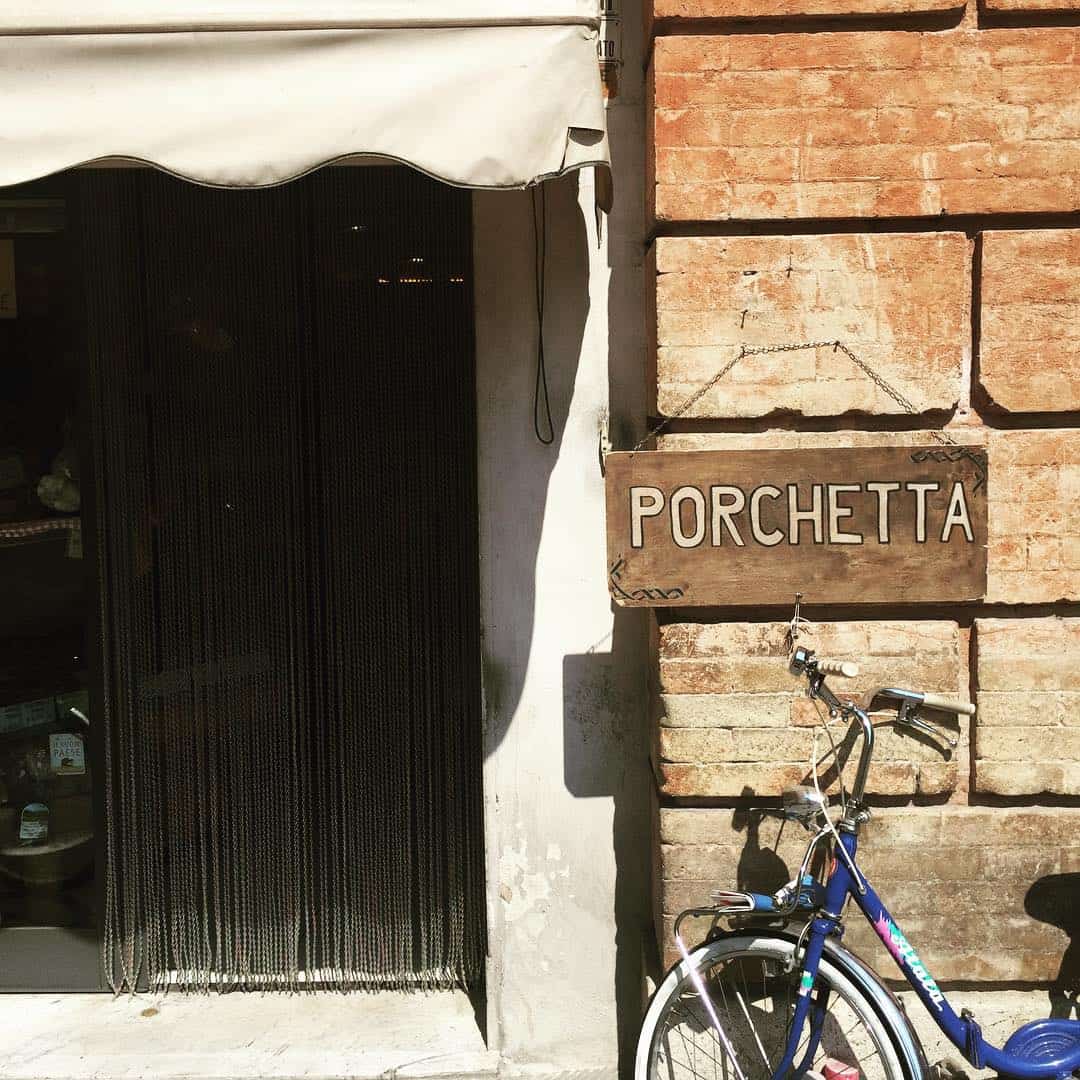 A delicious discovery - A tiny porchetta store in Macerata, Italy, sold only one thing. "When it's gone, it's gone!" I was informed.

Porchetta can be made with a variety of pork cuts, and indeed the whole pig - the general idea is that the pork is stuffed with a combination of herbs and spices along with garlic (traditionally, offal was also used to stuff the meat). The skin is left on so that it crisps up in the oven. Porchetta can be made in a wood-fired oven, a regular oven and also spit roast over a fire. A regular oven produces spectacular results, so fear not if, like me, that's all you have.

For my porchetta recipe, we'll use a pork belly. A large slab (around 6lb/3kg, with the skin on). Let's take a step by step journey on preparing and roasting this Traditional Italian porchetta.

We start with the essential flavourings to any porchetta recipe - fennel! Fennel and pork are a marriage made in heaven, and nothing says Italy more than the taste of fennel. To stuff the meat we're using a combination of fennel seeds, black pepper, garlic, salt, sage and rosemary. 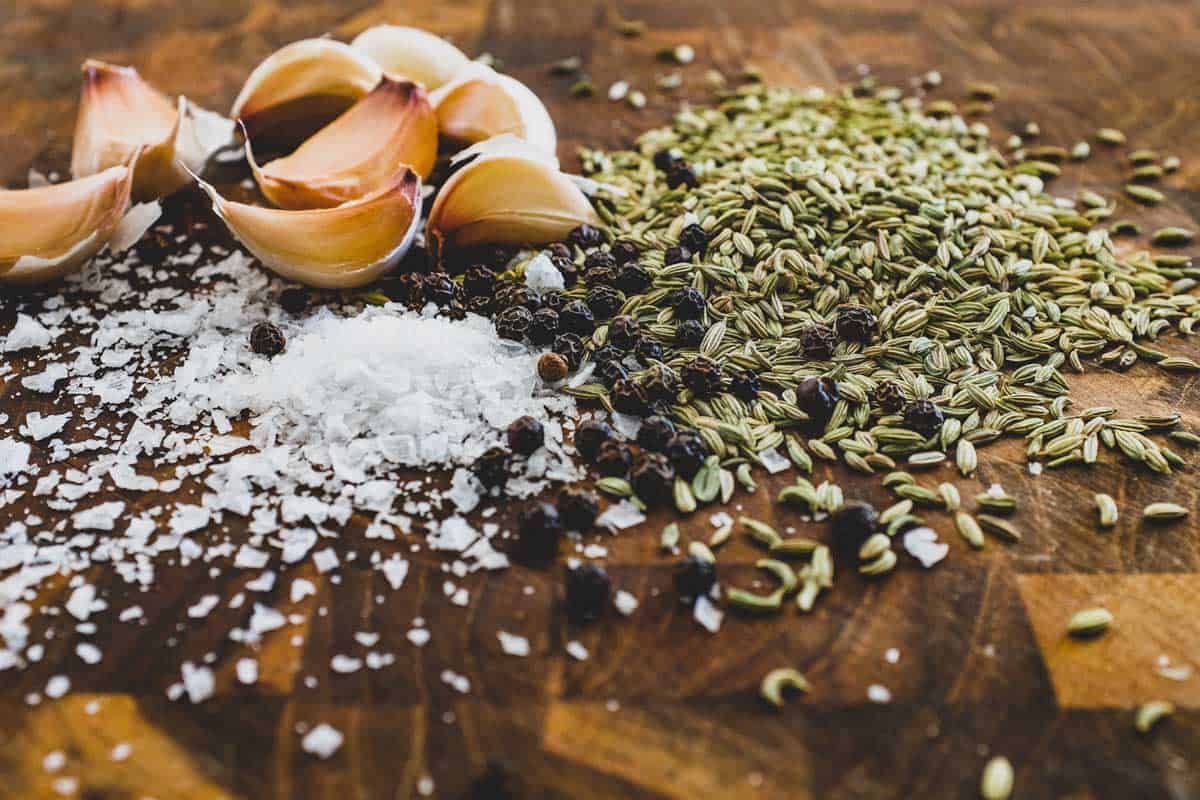 We first toast the fennel seeds and pepper in a dry frying pan, then using a pestle & mortar or spice grinder, grind the seeds into a rough powder. We mix this with the salt, finely chopped sage and rosemary and some minced garlic. This crumbly mixture becomes our stuffing. 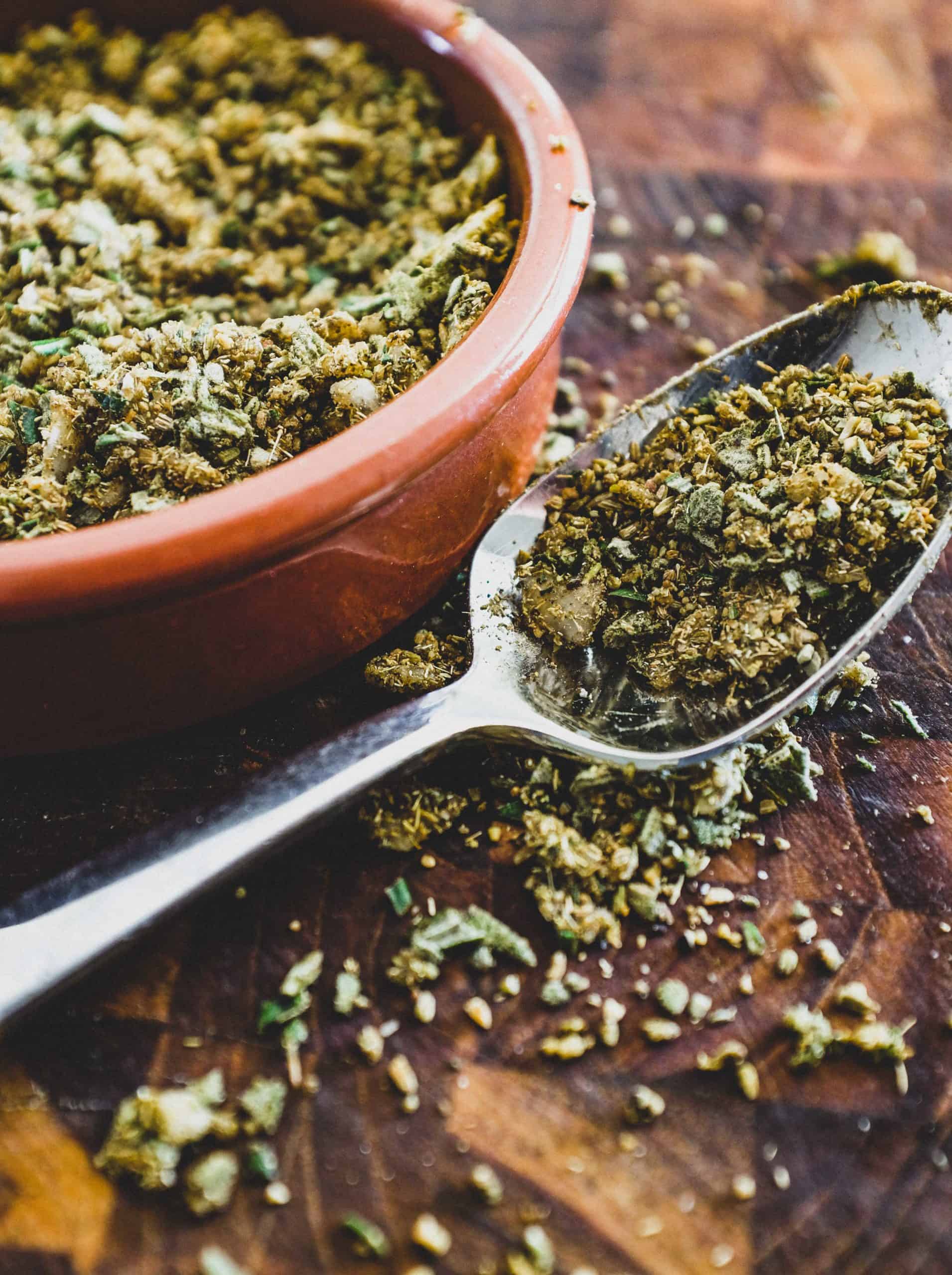 Using a sharp knife, we cut a shallow criss-cross over the meat side of the pork belly. We then sprinkle generously with the stuffing and massage into the meat and cuts. This will ensure maximum flavour when cooked. 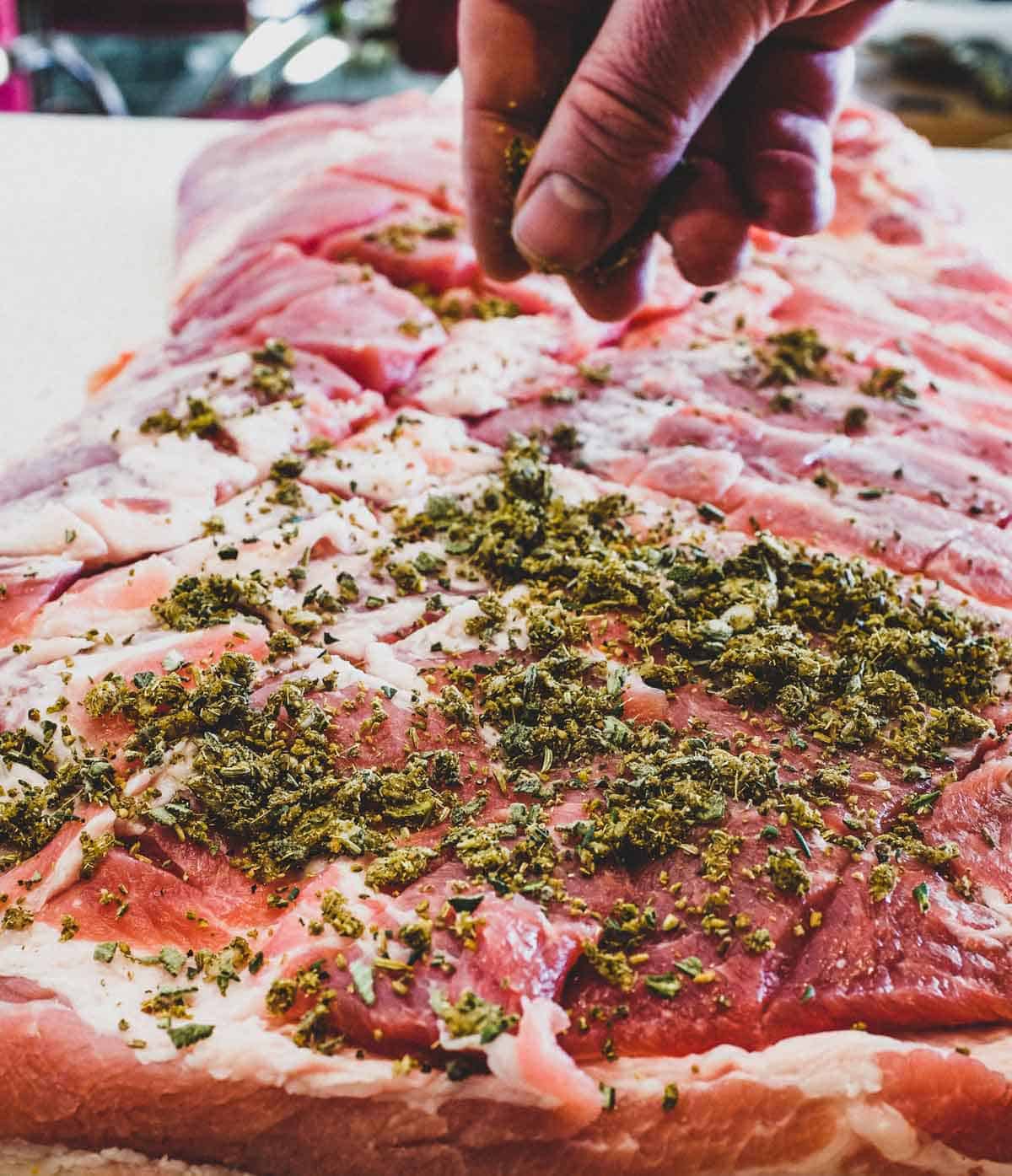 Now we take the meat and roll it into a sausage lengthways (the longest edge). We place the seam at the bottom and using kitchen string we tie the meat at small intervals to secure. Get it as tight as you can so that the pork keeps a good shape when cooking. This is easier than it sounds by the way! I also like to stab the skin around 20-30 times with a sharp knife. This will help with crisping up later.

Then it's into a preheated oven at a low temperature of (300ºF/150ºC) on a rack in a roasting tin. I like to add a couple of cups of water (or white wine) to the roasting tin. This helps keep the meat moist during cooking. I normally top it up halfway too. This meat is in the oven for a long time... 4 hours to be precise. It's worth the wait, trust me. 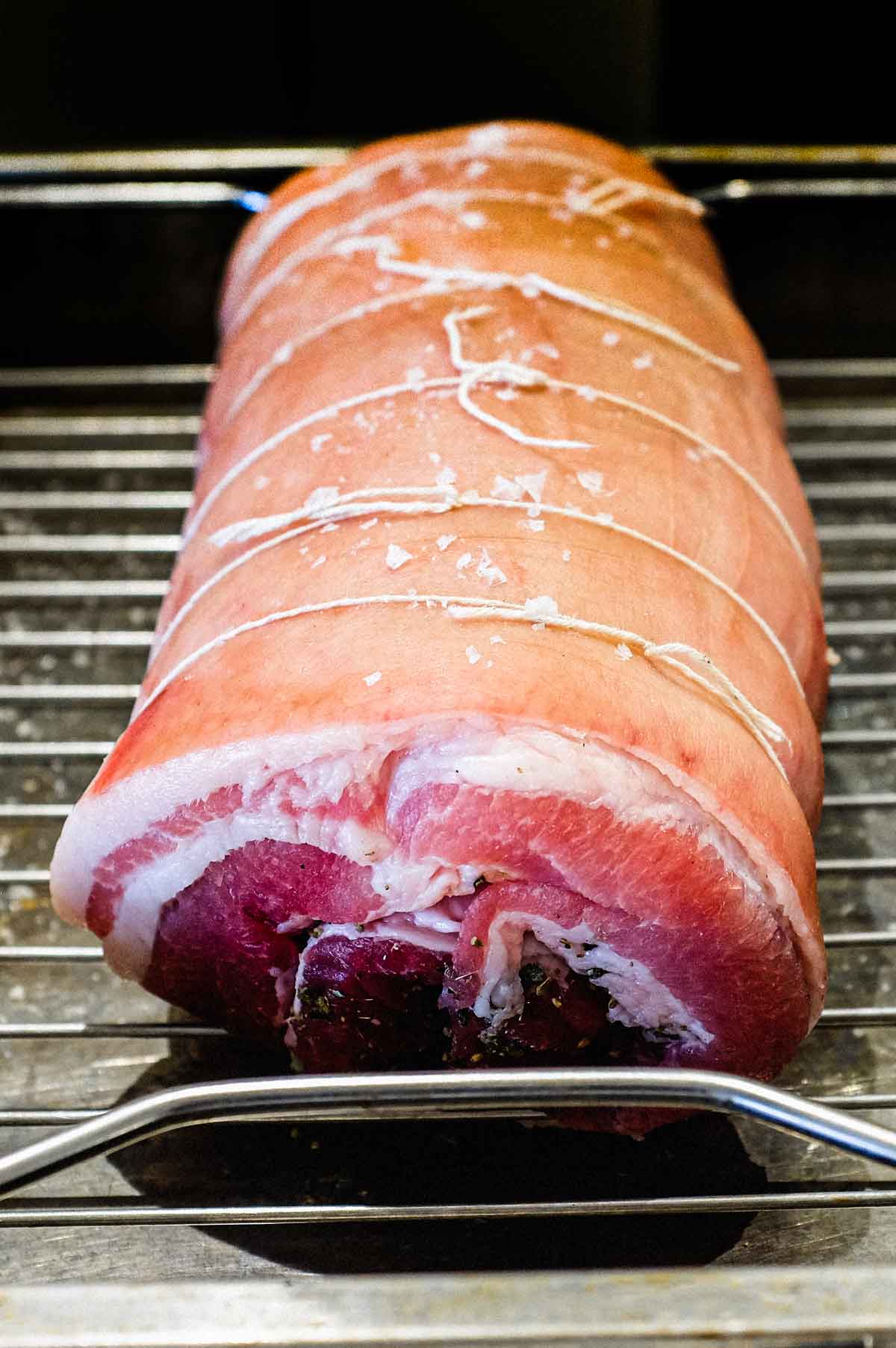 4. Crisping the skin to perfection

Now, any porchetta is only as good as it's crunchy skin. It's essential that you get a good 'crackling' (as we call it in England). My technique is pretty much failsafe. The key to a good crunch is achieved right at the beginning. Ensure that your pork skin is DRY before it goes in the oven. I like to sit the skin on paper towels for a while to soak as much moisture. Sprinkle a little salt over the skin before cooking too. 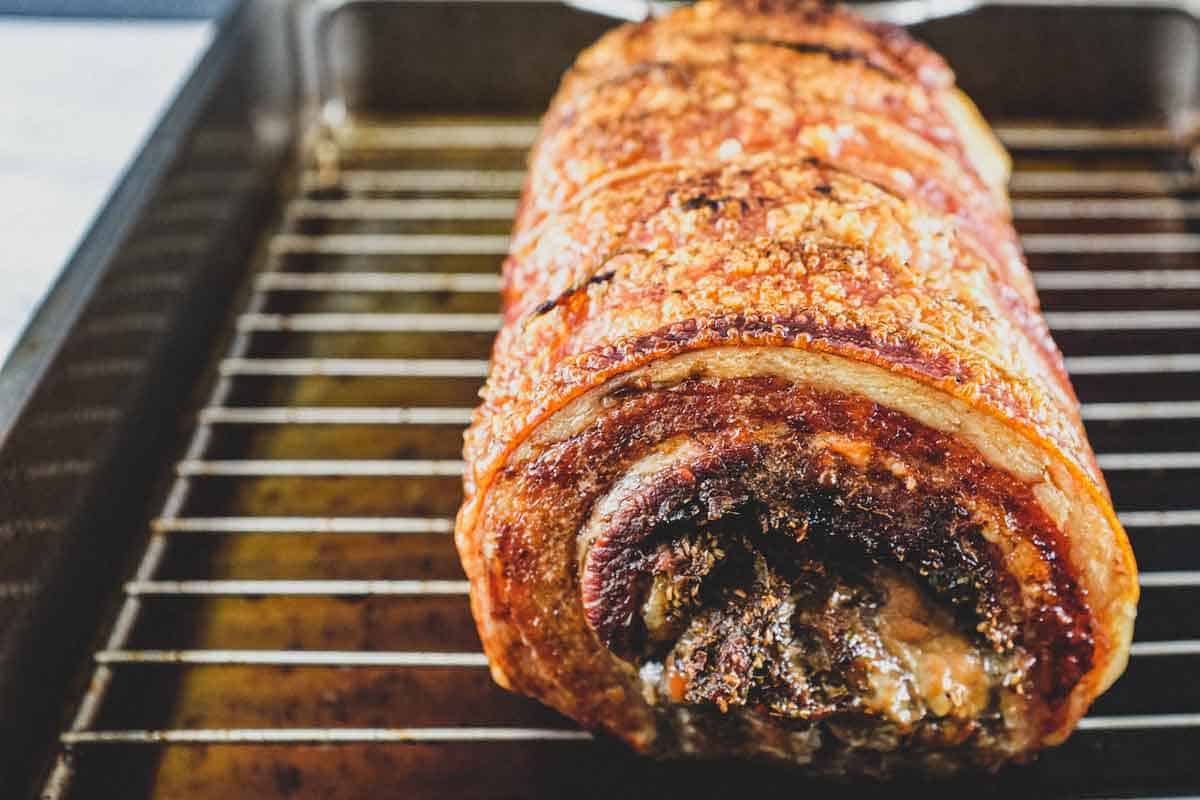 Getting the best crunchy skin

The key to getting the real crunch is to crank up the heat after 4 hours. I'll turn up the oven to 450ºC/230ºC and watch the meat like a hawk! (It can burn quickly). I'll take a quick peek every 20-30 seconds to make sure it's not burning for about 5-10 minutes. The skin suddenly bubbles and crisps like magic under that temperature. Give it a little tap with a knife to hear how crisp it is. It's the best way I've found of creating an excellent crunch.

Let the meat rest loosely under foil for about 30 minutes - the juices will settle and the meat becomes even more soft and tender. Then, simply remove the strings and get slicing. Thick or thin, it's your call. TOP TIP: Use a serrated knife (like a bread knife) to saw through the crisp skin, it's way less dangerous! 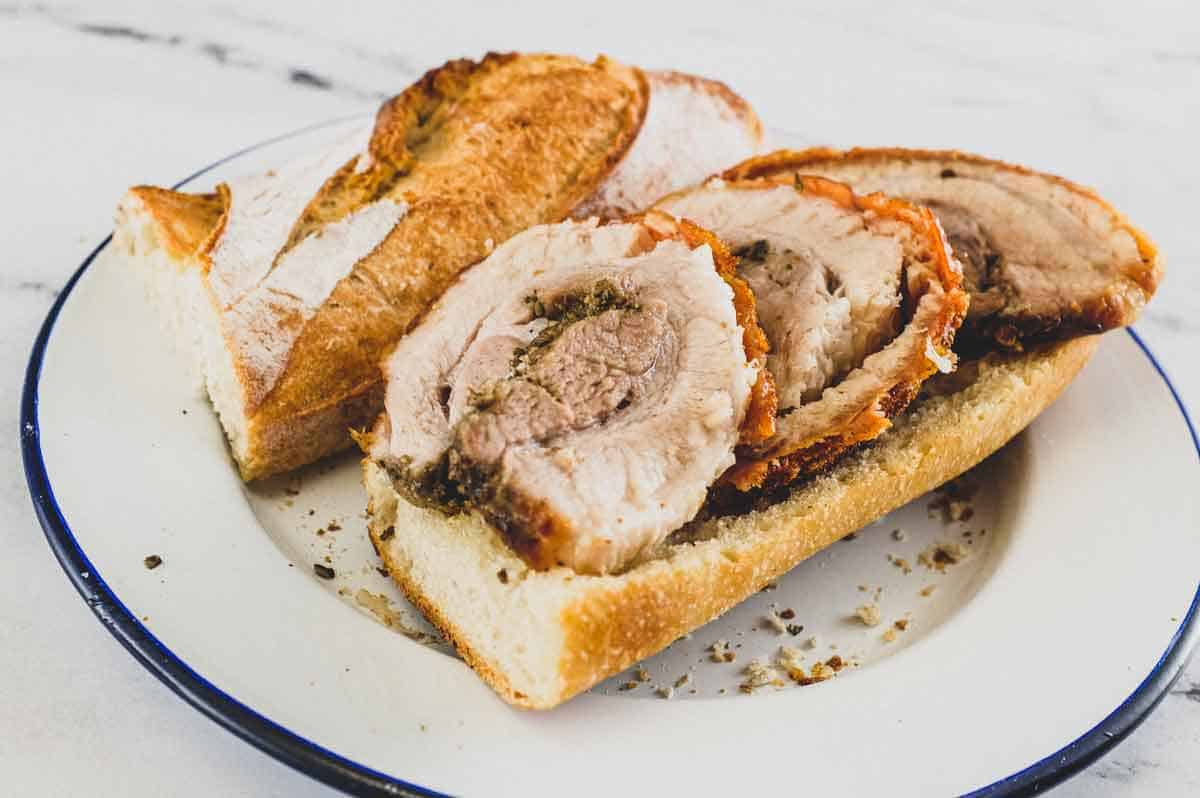 The Porchetta Sandwich - as close to perfection as is possible.

The Italians KNOW not to mess with a good thing, and porchetta is most often served as a sandwich, nothing else but bread and porchetta - sometimes they'll slather on some pickles or antipasti vegetables, but I prefer it without anything. On its own, it's as close to food perfection as it gets. The meat is meltingly soft (the fat content in a pork belly keeps the meat juicy and tender). But the real winning element is the note of fennel and herbs which permeate every bite - seasoned for the gods! The pops of crunchy skin combined with the soft meat and chewy bread is another level of delight! I could go on... but really, you just need to experience it for yourself.

You can, of course, serve porchetta in any way you like, as part of a larger meal, with salads or vegetables, but I think served as the Italians do is pretty much perfect.

How to make my Italian Porchetta 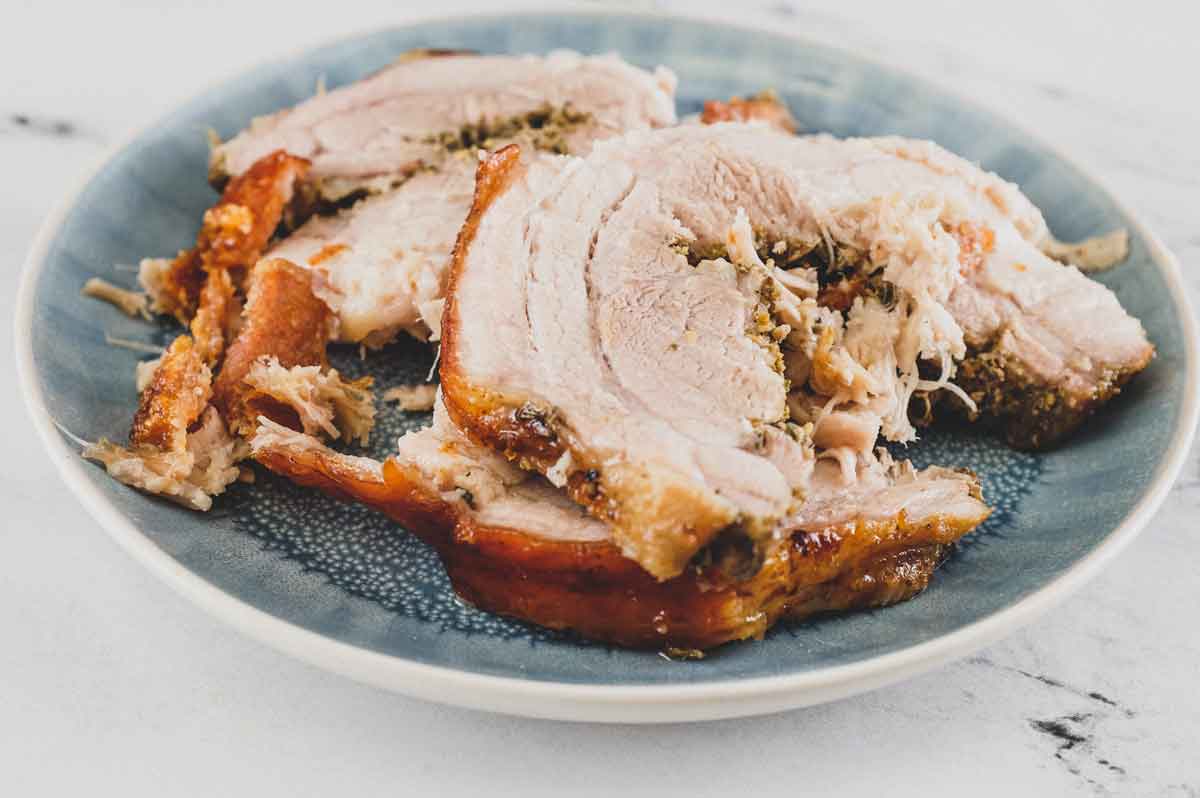 Did you make my Italian Porchetta?