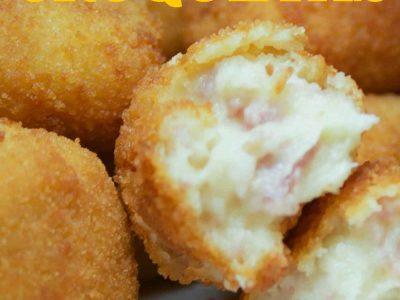 There’s a good reasn why Spanish Jamon croquetas are amongst the most treasured little bites in the country. They’re absolutely addictive! Creamy, salty and crunchy – the perfect tapas bite! Learn how to make them at home for your next Spanish feast. 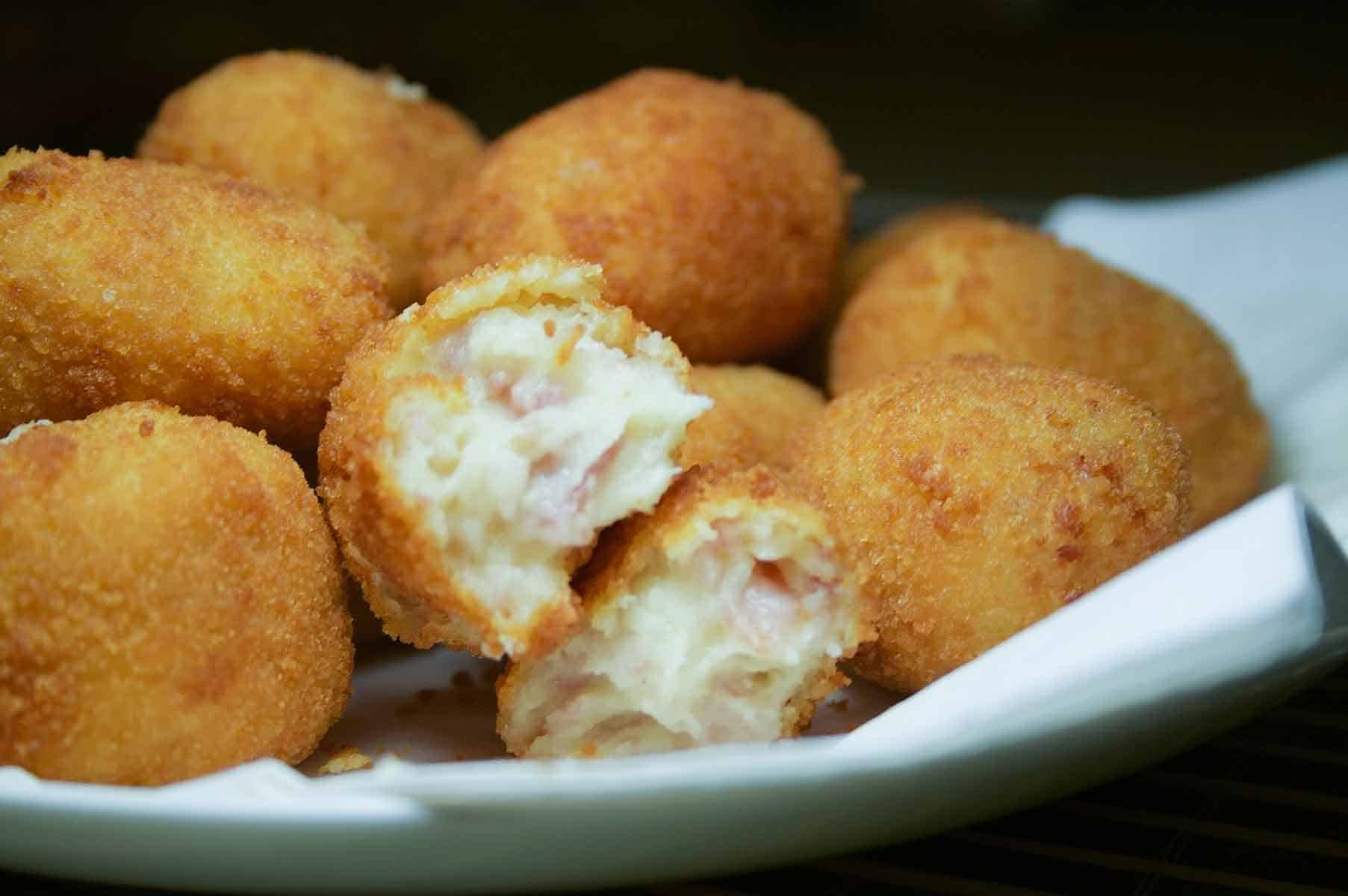 When I think of Spanish Jamón Croquetas, I’m transported back to my childhood, to the 70s. For some unexplained reason they have an old fashioned air. I think maybe back then Spanish food became ‘the thing’ and dinner parties became more and more adventurous. Croquetas or Croquettes were seen as the height of sophistication and culinary daring. My mother made them to impress her Friday night girls’ nights, but while they drank all the wine, I would invariably cook and eat most of them. Nothing has changed, I still ‘test’ a few to ensure they’re OK before anyone else gets a look in.

As times moved on, outside of Spain, croquetas seemed to get left in the breadcrumbs and lumped in with beef wellington, prawn cocktail and crepe suzette as a bit old hat and fussy. In my opinion, this old fashioned moniker is completely unfair – croquetas are utterly divine! Intense little nuggets of Spanish ham in a creamy, decadent interior, surrounded by crunchy deep fried exterior. What is not to completely love about that!?

In Spain they’re a national treasure and are served at every tapas bar in all manner of experimental form. My favourite, and the most classic is jamón ham. The Spanish cousin to Italy’s Prosciutto. Spanish ham in itself is one of my most favourite things to eat in its own right. Reaching dizzying expense, jamón can be out of a lot of people’s budget – but I say go for the cheaper varieties like Serrano, they still impart a tonne of flavour to each fried nugget. Unless you’re a gazillionaire, don’t use the Jamón Iberico – that’s best on its own with a giant glass of Tempranillo.

There are some dishes that just belong together. I can’t eat a croqueta without dunking it in my homemade smoked alioli. Alioli is the Spanish version of mediterranean Aoli or simply garlic mayonnaise to be straightforward. My version features another quintessential Spanish ingredient – smoked paprika. The powder from smoked and dried red peppers. It comes in two varieties: sweet and hot – you can use either, but I tend to use the sweet for my alioli. It’s a perfect balance to the ham infused croqueta. I wouldn’t even consider eating croquetas without a garlic mayonnaise of some kind.

Once you’ve made the alioli, it’s also an essential accompaniment to my delectable Tortilla Española – the classic Spanish potato omelette. It’s also fantastic when drizzled over a hot pan of paella.

So, it’s time to resurrect a Spanish favourite and a wonderful addition to any Spanish Tapas dinner party. Read all about how Tapas became a staple across Spain and discover lots more small wonders and how to cook them at home. Next time you want to visit Spain at home, make sure Jamón Croquetas are on the menu.

How to make my Spanish Jamón Croquetas 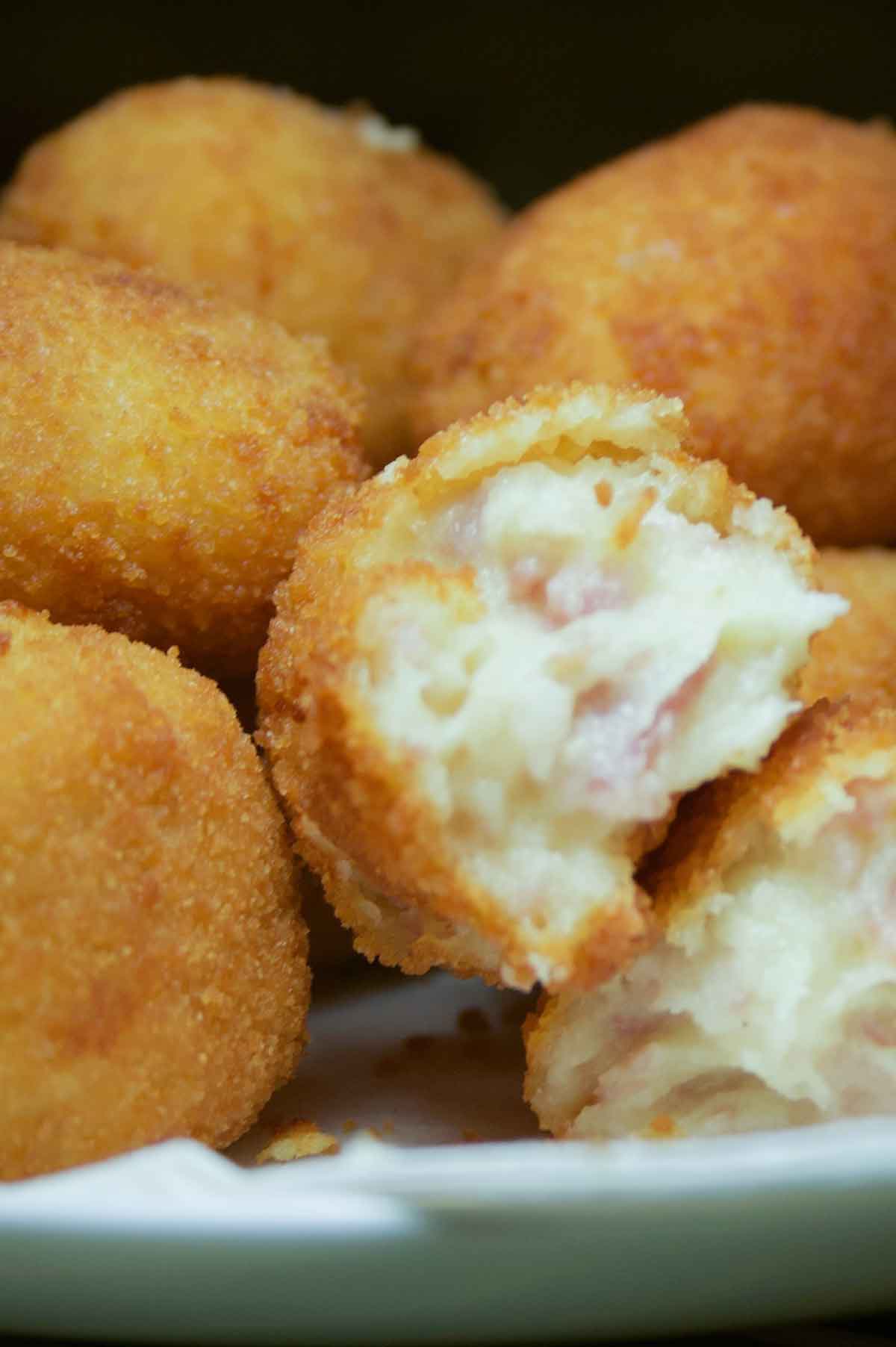 Did you make my Spanish Jamón Croquetas?