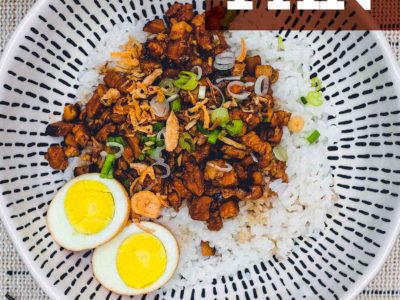 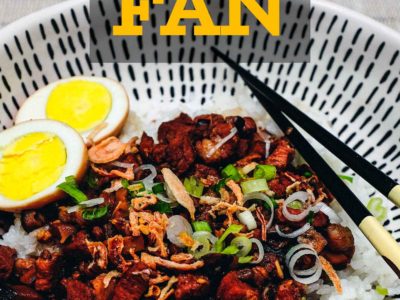 Fragrance all the way with this beloved Lu Rou Fan (Taiwanese Braised Pork Rice Bowl) – 滷肉饭 – tender pork belly in a sauce supercharged with flavour, all over a bed of fluffy rice. It’s pure perfection. 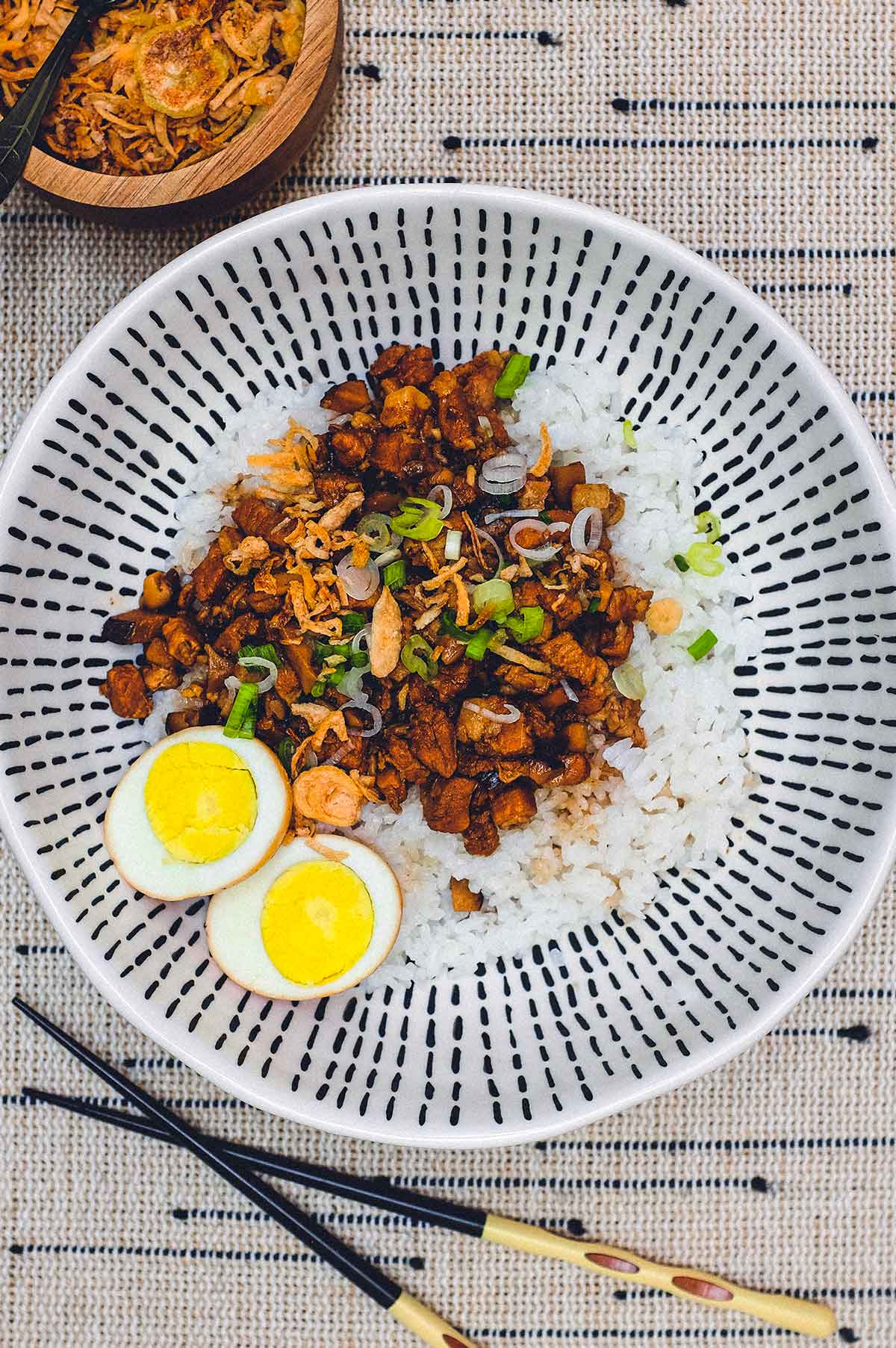 Rice bowls are everyone's favourite, right?! This Lu Rou Fan (Taiwanese Braised Pork Rice Bowl) 滷肉饭, is amongst the tastiest you're ever likely to experience. I've long been a fan of that OTHER super tasty Taiwanese Rice Bowl - Taiwanese Turkey Rice, but my appreciation for Lu Rou Fan runs deeper. The flavours are so balanced and deeply satisfying. Sweet, aniseed, salty and savoury! It's an umami explosion.

What is Lu Rou Fan?

Lu Rou Fan is a dish that some say originated in the Chinese province, Shandong, but which is now beloved by the Taiwanese. It consists of pork, usually ground/minced slow-stewed with regional spices to create a type of ragù. This is then served, typically with rice but also over noodles. In some regions of Taiwan, ground pork is replaced with pork belly, cut into small pieces. The addition of hard boiled eggs has become something of an 'essential' accompaniment, but not a hard and fast rule - it's up to you, but I strongly advocate the eggs!

Interestingly, the meat sauce is seen as a mere seasoning to the rice and used sparingly. When I've eaten Restaurant style Lu Rou Fan, I've often had that 'western' shock that there's not much meat on the plate. But the idea is that the sauce is there to highlight the starchy, filling rice, is something that I have to conclude (even as a greedy person) that I'm not mad at! 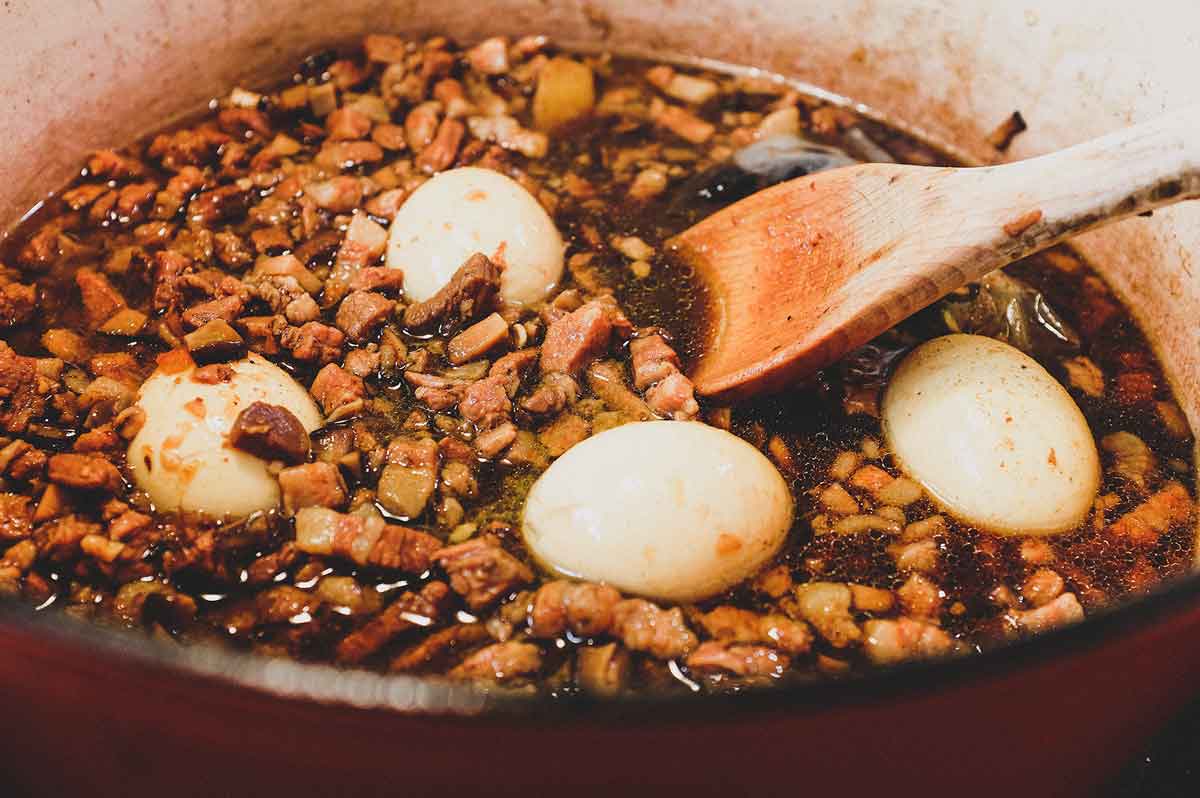 My Lu Rou Fan recipe uses pork belly, because... pork belly. Let's face it folks, there aren't many cuts of meat more tasty. And let's not be squeamish here either. LEAVE THE FAT ON - That's where all the flavour happens. Just remember one of two things, 1. you're not eating much of it, 2. get over yourself. 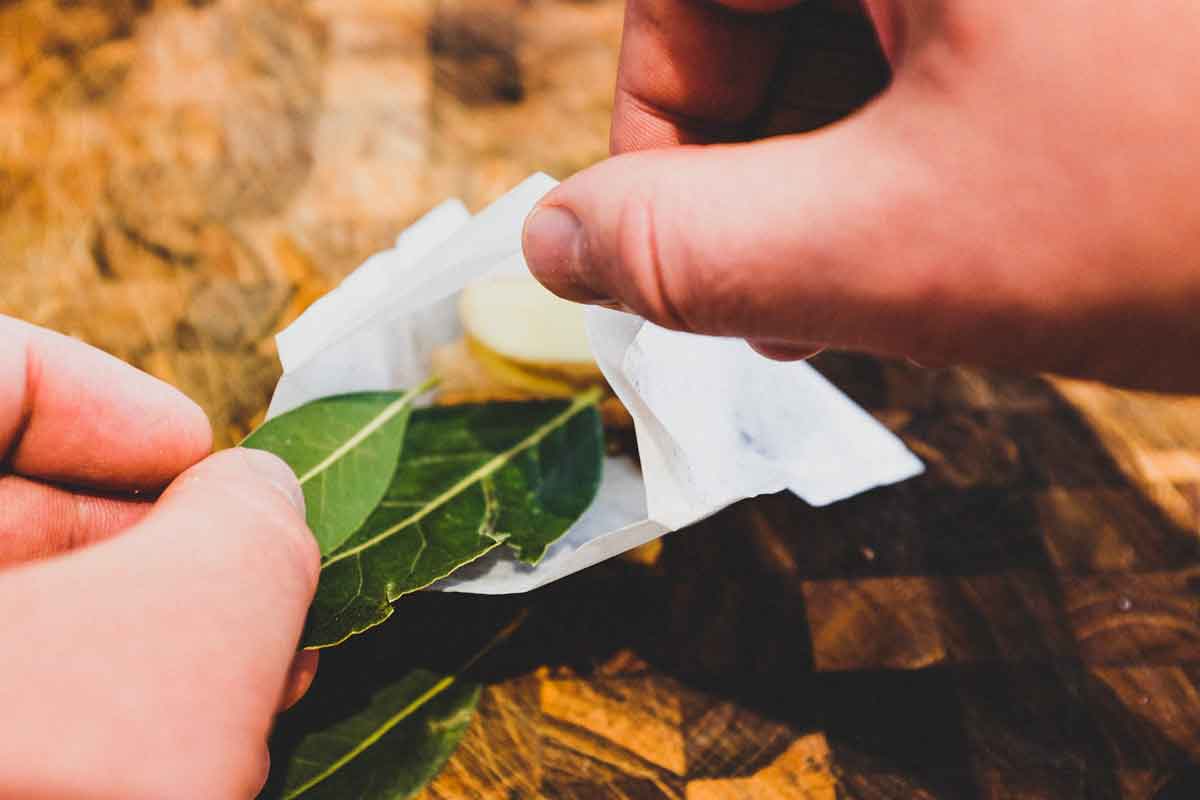 There's also a roll call of fragrance in all the other ingredients - salty and umami from the soy sauces and the shiitake mushrooms (I use fresh shiitake mostly as they're cheaper, but dried will give a deeper flavour - just rehydrate them before using). There's also fragrance from the spice tea bag! Ginger, orange peel, cinnamon, star anise (one of the most alluring flavours on the planet!) and bay leaves. So many strong flavours all work in complete harmony. Lu Rou Fan really is a taste sensation it's so much more than just pork and rice! Incidentally, these little spice bags make all the difference when cooking - saves fishing out whole spices or worse still, biting into a whole star anise (not so alluring). You can buy said spice bags HERE and you're welcome. 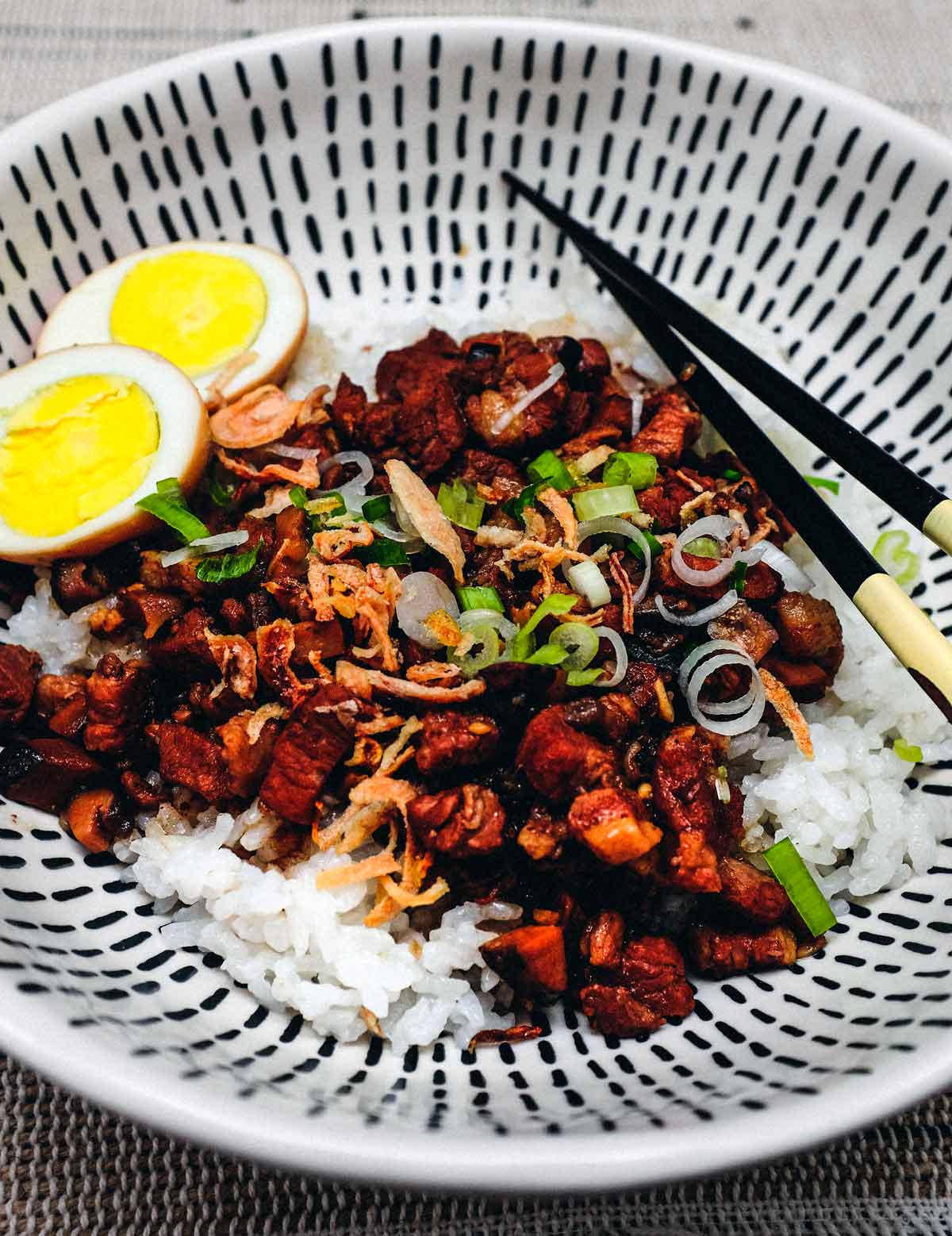 My Lu Rou Fan recipe, like many others features hard boiled eggs as an accompaniment. You do not need to ask me twice (or even once) if I want an egg on anything. The answer is always YES! My recipe doesn't specify how many eggs to use, as I will only cook for as many people as are eating there and then. This sauce freezes well, but boiled eggs do not, so just cook 'a la minute' as they say in the trade. i.e. to order.

You should cook the eggs first (8 minutes in boiling water), and then braise for 10-30 minutes in the sauce. If you're using reheated sauce from the freezer, just skip the braising and get straight to plating!

So in essence, you'll fall in love with this Taiwanese braised pork! Lu Ru Fan is tasty, simple and a real show-stopper. You'll be a real fan! (Clumsy puns are the best!)

For those fans of pork belly (like me) here are a couple of noteworthy Asian dishes to try at home. 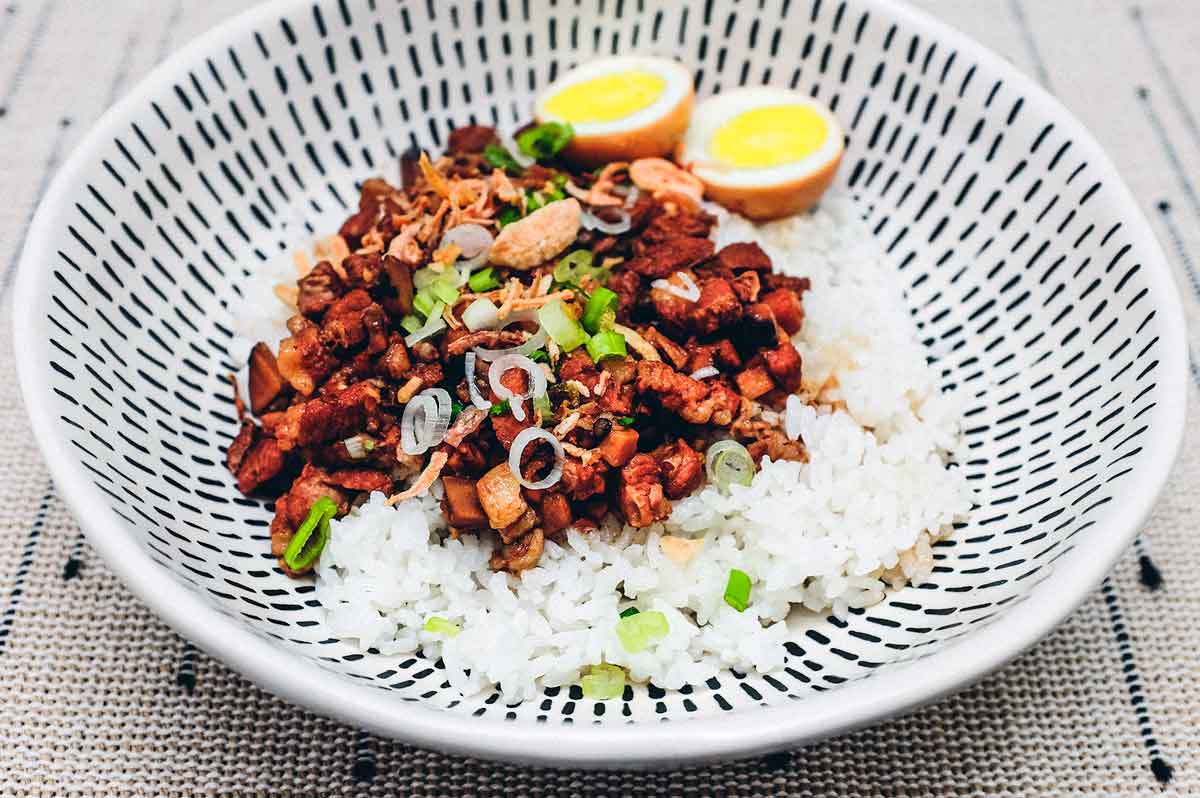 I sometimes like to serve my Lu Rou Fan over a bed of mixed rices. Forbidden rice (black rice) mixed with regular long grain rice is a great combination and you end up with a wonderful purple tinted rice bowl and fragrant, slightly crunchy flecks of rice. It's the perfect combination for the Lu Rou Fan sauce. You can learn how to combine the black & white rices with my Taiwanese Turkey Rice recipe.