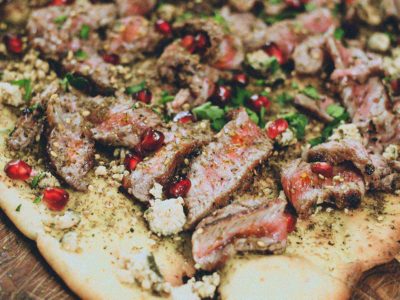 For a quick and easy alternative to pizza, this flatbread with juicy beef and a fragrant scattering of Za’atar spice mix paves the way for a light sprinkling of the Middle Eastern cheese, shangleesh (shanklish). Full of flavour, so easy! 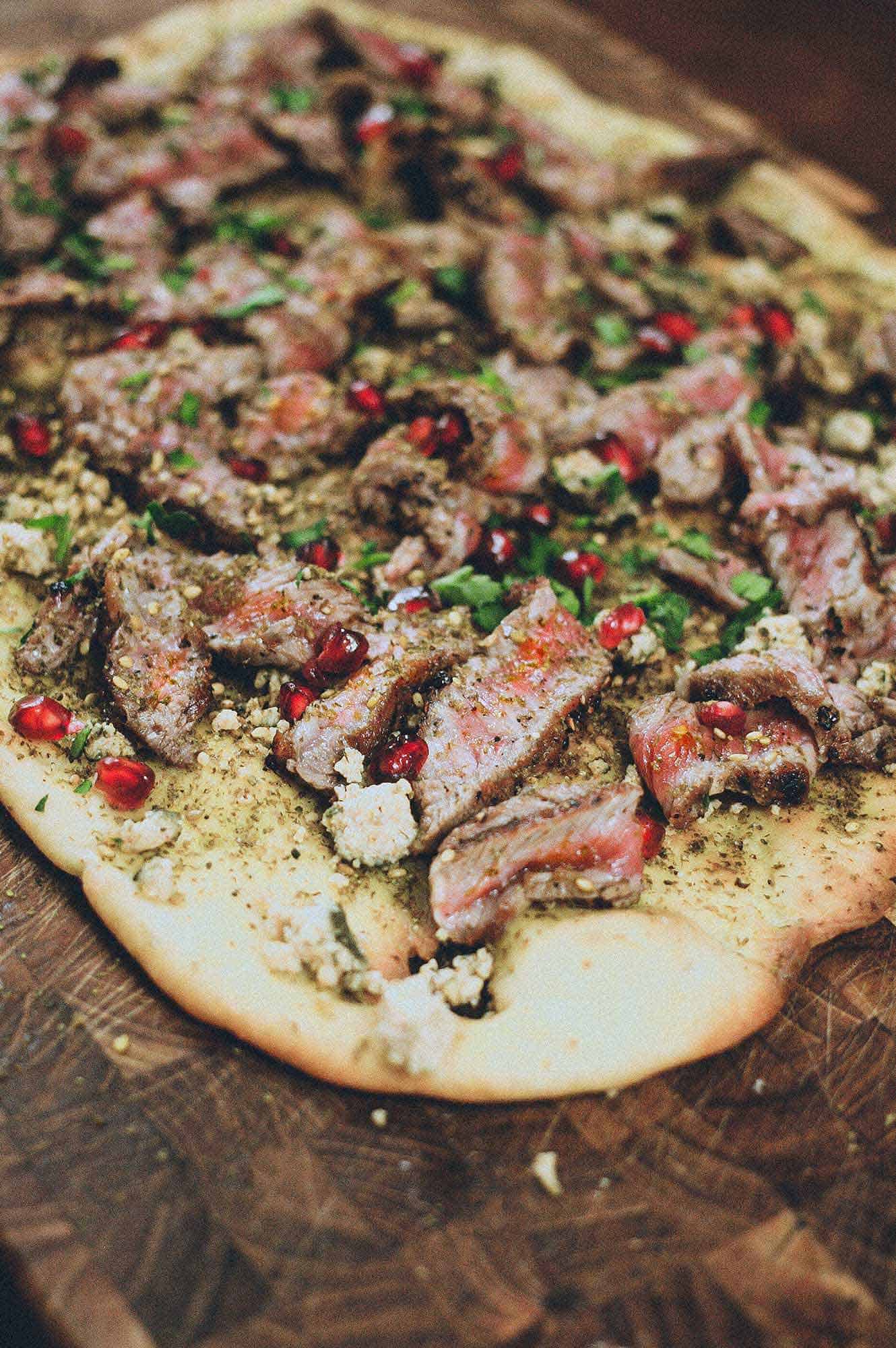 This Za'atar Bread with Beef & Shangleesh is a super simple Middle Eastern delight! I was feeling a little lazy when I first made this - I couldn't summon the energy to cook something too involved - I just wanted a quick, tasty treat.

Za'atar Bread made from shop bought Pizza Dough - it's genius.

In the fridge, there was a shop bought pizza dough - I'd bought it with pizza in mind a few days earlier but during one of my supermarket vague-outs had completely forgotten to buy anything to put on top of the pizza. Other than that, I had zero ingredients. There WAS a steak, but steak pizza sounded a bit weird so further brainstorming was required. My mind drifted to Turkey...

The flavours of Turkey and the Middle East

One a trip to Turkey, one of my favourite things to grab in the street for a quick snack were the delicious breads, Simits and Zahtar (Za'atar) breads. Simits being a bagel-like bread covered with sesame seeds, and Zahtar bread a yeast flattened bread covered in olive oil and zahtar/za'atar. It's an alluring smell - herby and nutty and would waft through every street in Istanbul, tempting me at every turn.

Making this bread with a pre-bought proven dough is as simple as it gets. Just roll it out and generously cover with za'atar and olive oil. I'd used this method before, but had always just made straightforward za'atar bread - but this time I made use of the steak and also a little Shangleesh Cheese I had in the fridge.

Shangleesh/Shankleesh is a Middle Eastern cheese that's been rolled in dried thyme and aged, sometimes in oil - it's a little like feta, but more intense. It's absolutely delicious! You could easily substitute the Shangleesh with Feta, and it would be just as delicious. If you get hold of it, you could and should try my amazing Shangleesh Salad (Lebanese Breakfast Salad) - it's a dream everyone should wake up to!

So here we have it, Part Turkish, part Lebanese - let's call it a Middle Eastern Inspired flatbread. It's a super simple dish to put together and looked rather splendid for the 5 minutes it was on the table.

If you're searching for something a little different than Pizza for dinner, give this Za'atar Bread with Beef & Shangleesh a whirl. If you have any Za'atar leftover, then give this deliciously creamy Harissa hummus with Za'atar a go too.

What is Za'atar?
Za'atar is a herb mix made from a combination of dried herbs, including thyme, oregano and marjoram. Also included are toasted sesame seeds and the ground sour sumac berry.

What does Za'atar taste like?
It's a herby, salty, nutty and sour hit of flavour. The predominant flavour are the herbs which lend a beautiful earthy fragrance to any dish.

I don't have Za'atar, what can I use instead?
You can create your own by combining dried thyme, oregano and/or marjoram with toasted sesame seeds.

What else can I use Za'atar for?
You can sprinkle it over meats, vegetables and fish. Combine it with oil and vinegar to make salad dressings. It's best as a condiment, so anywhere you'd sprinkle herbs, you can use Za'atar.

What can I use Shangleesh for?

You can use it in salads, sprinkled over breads, vegetable meats and fish. It's traditionally popular at breakfast time and mashed with eggs, and served with cucumber, tomatoes.

I can't get hold of Shangleesh what should I use instead?

Shangleesh goes under lots of other names so try searching one of the following instead: Shankleesh, Shanklish, Chancliche, Shinklish, Sorke or Sürke.
Failing that, It's probably closest in texture and flavour to a good quality Bulgarian or Greek feta cheese.

How to make my Za'atar Bread with Beef & Shangleesh

What else can I make using Shangleesh and Za'atar?

Try some of these recipes:

What other dishes pair with Shangleesh and Za'atar?

Try some of these recipes: 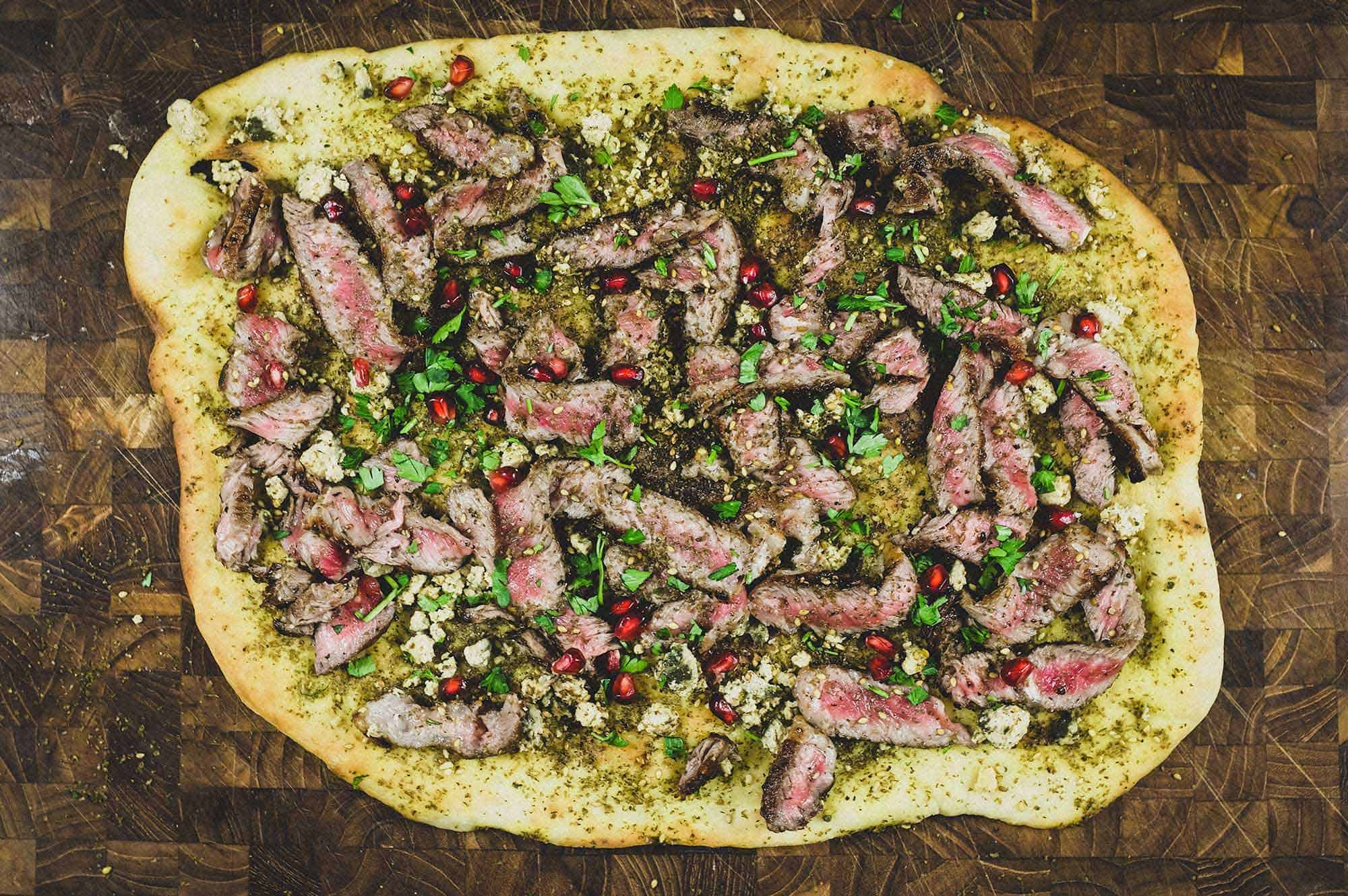 Did you make my Za’atar Bread with Beef & Shangleesh Recipe?