One-pot dishes are my favourite! None is more delicious than this Chicken Pilaf – fluffy rice is cooked with chicken pieces to create a flavourful one-stop meal. 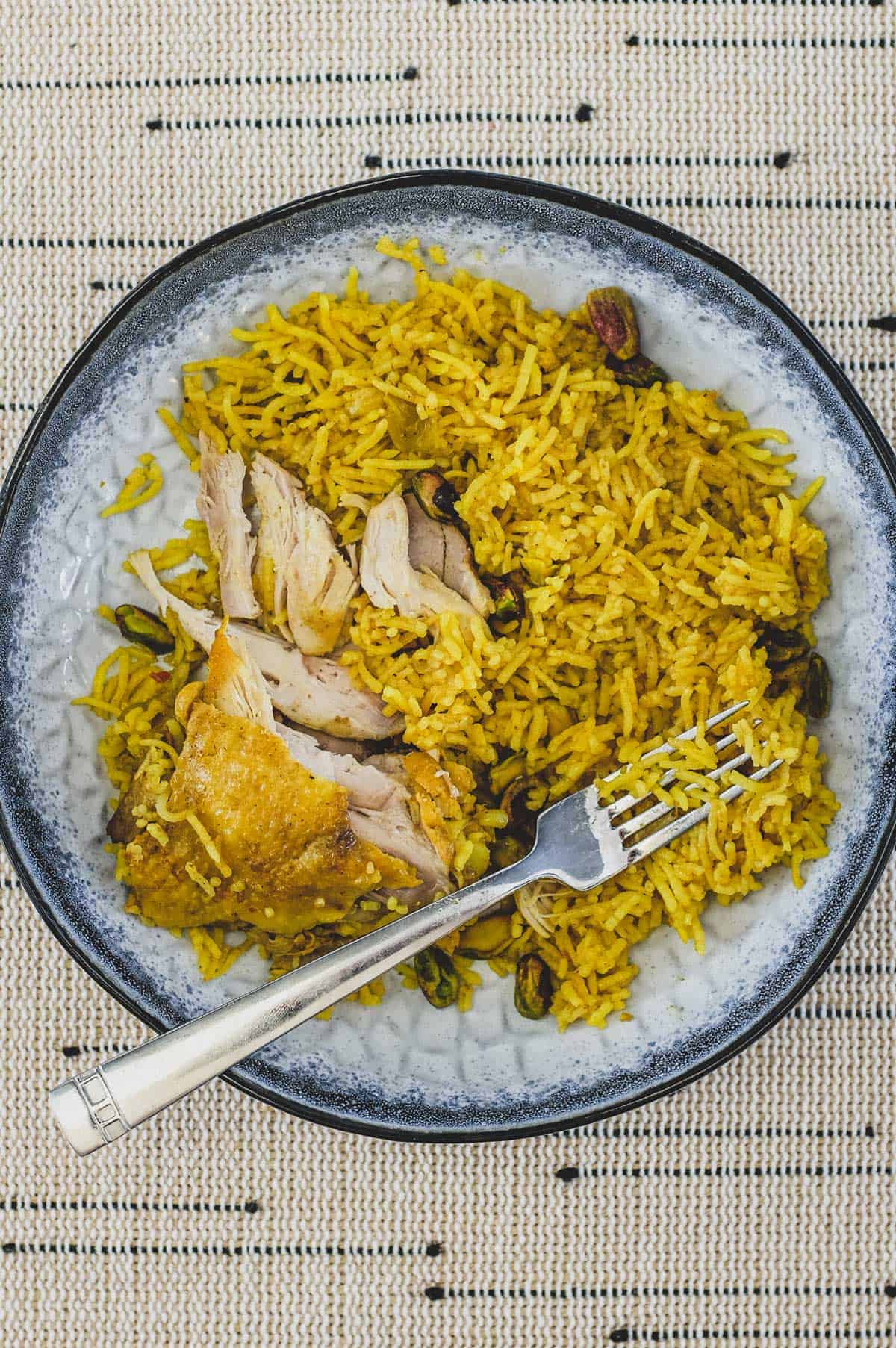 I love one-stop meals - one pan creating all the magic, so that all you need is a spoon and some elasticated clothing.

For my pilaf with chicken, I take inspiration from Iran and the Middle East. Warm spices create a wonderfully fragrant dish that marries perfectly with the soft chicken pieces and fluffy basmati rice.

Rice pilaf recipes (also going under the name of Pilau, Pilav, Pulao, Palaw, Plov and Polao) are popular across Central and Eastern Europe, Russia, Iran and the Middle East. They come in a mind-boggling array of varieties and can feature meat, vegetables and fruit and grains other than rice, like bulgur, freekeh, barley and more. The dish is said to have originated in Persia, rising to amazing heights of rice-making magic.

The key to a good pilaf

The key to creating a flavourful pilaf with chicken is the use of stock/broth. It can be made with water, but cooking the rice in stock creates a much fuller flavour. You can obviously use a store-bought chicken stock/broth, but for an even more superior chickeny flavour - homemade broth is best! My chicken pilaf recipe takes advantage of a whole chicken, including the carcass, which creates the flavourful stock.

We separate the chicken into 8 pieces (2 x drumstick, 2 x thighs, 2 x wing/half breasts, 2 half breasts) We're left with the carcass and wingtips - they'll be used to make the stock/broth for this dish. Learn how to make the fresh chicken stock here. Alternatively, you can use 8 chicken thighs and store-bought chicken stock. 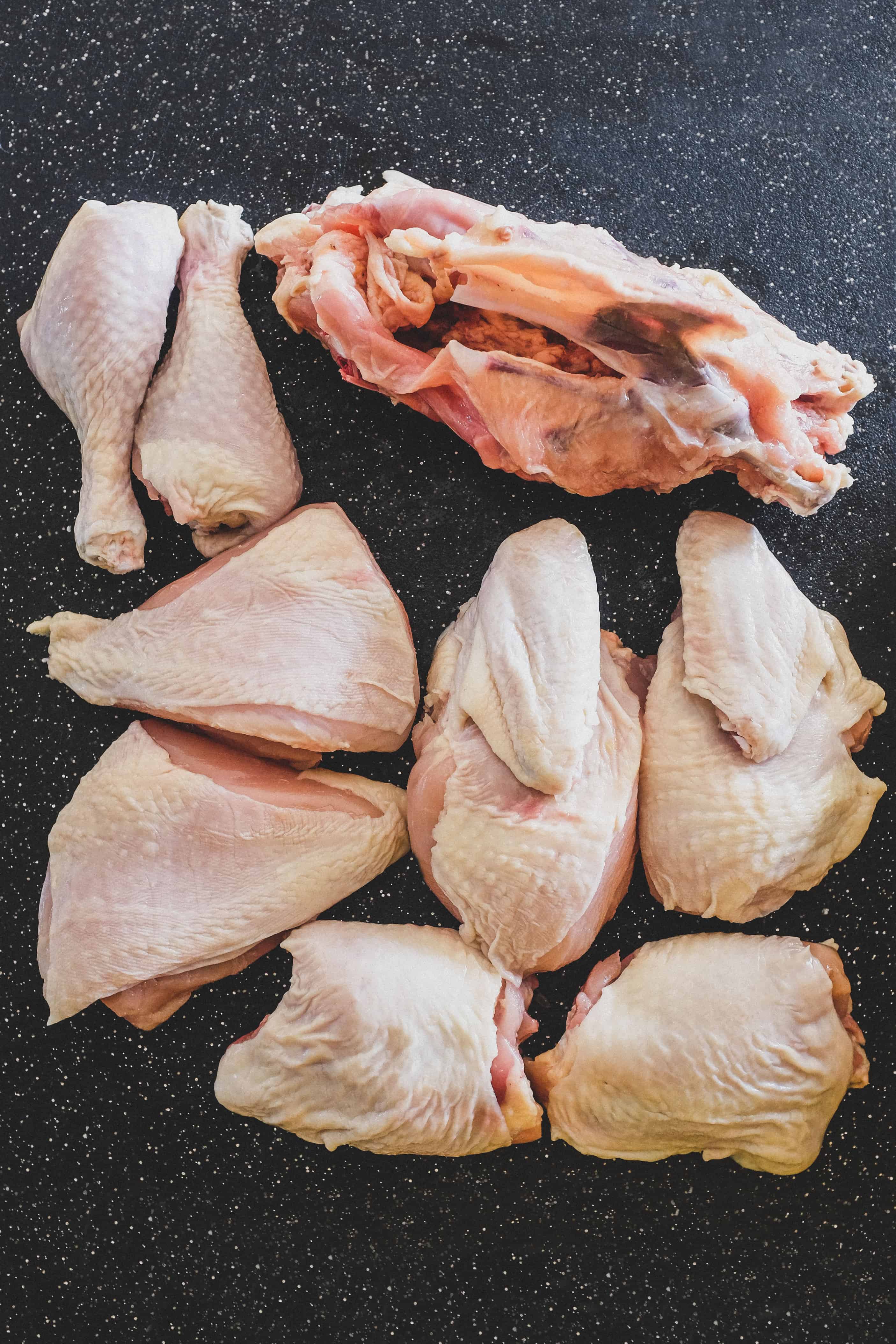 Now it's a simple case of cooking the chicken a little in our Baharat spice mix (see below) with onion and a little tomato. We partially cook the chicken so that the rice and chicken are fully cooked at the same time - it also gives a little colour.

We now add the pre-soaked rice to the meat and then add the stock. My rice to liquid ratio is 1:2 - 1 part rice, 2 part liquid. Once bubbling, it's a very light simmer for 25-30 minutes until all the liquid is gone. And we NEVER stir the rice. This will create excess starch which will create stodgy rice and overall sadness to yourself.

The next step is to remove the chicken pilaf from the heat, remove the lid and then place over a clean tea towel. We then replace the lid and leave the pilaf for 30 minutes. The teatowel catches the excess steam and helps create a fluffy texture to the golden rice. 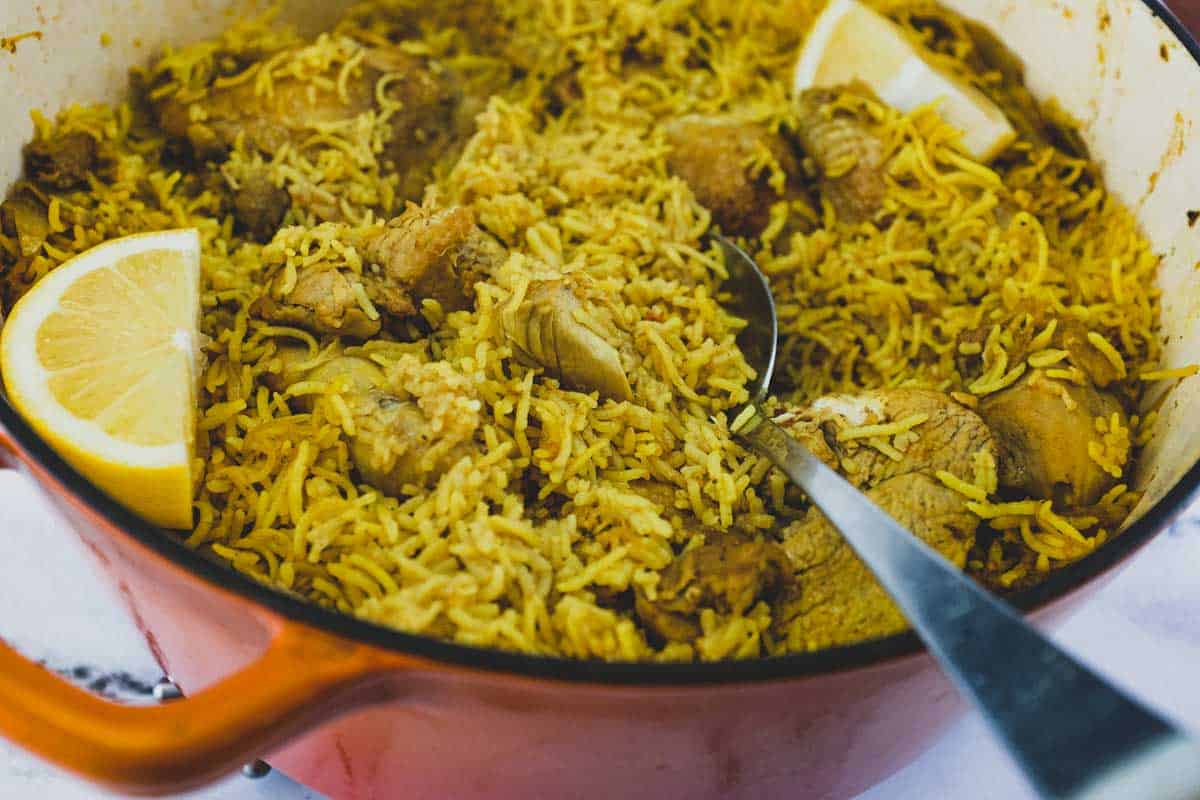 While the chicken pilaf is cooking I like to fry some nuts in butter. Typically pistachios, but often almonds, walnuts, pine nuts or even hazelnuts. I'll sprinkle them generously over the pan later.

Serving the chicken couldn't be easier. I generally use all my strength (this pot + chicken + rice is a tonne weight) and pop it on a trivet in the centre of the table and then fire a starter-gun to allow the wolves to begin their feast! I like to serve mine with some lemon wedges to squeeze over. It's a pot luck to see which cut of chicken you get - personally I love the thighs and will usually insist on getting one, removing it from someone else's plate if necessary. 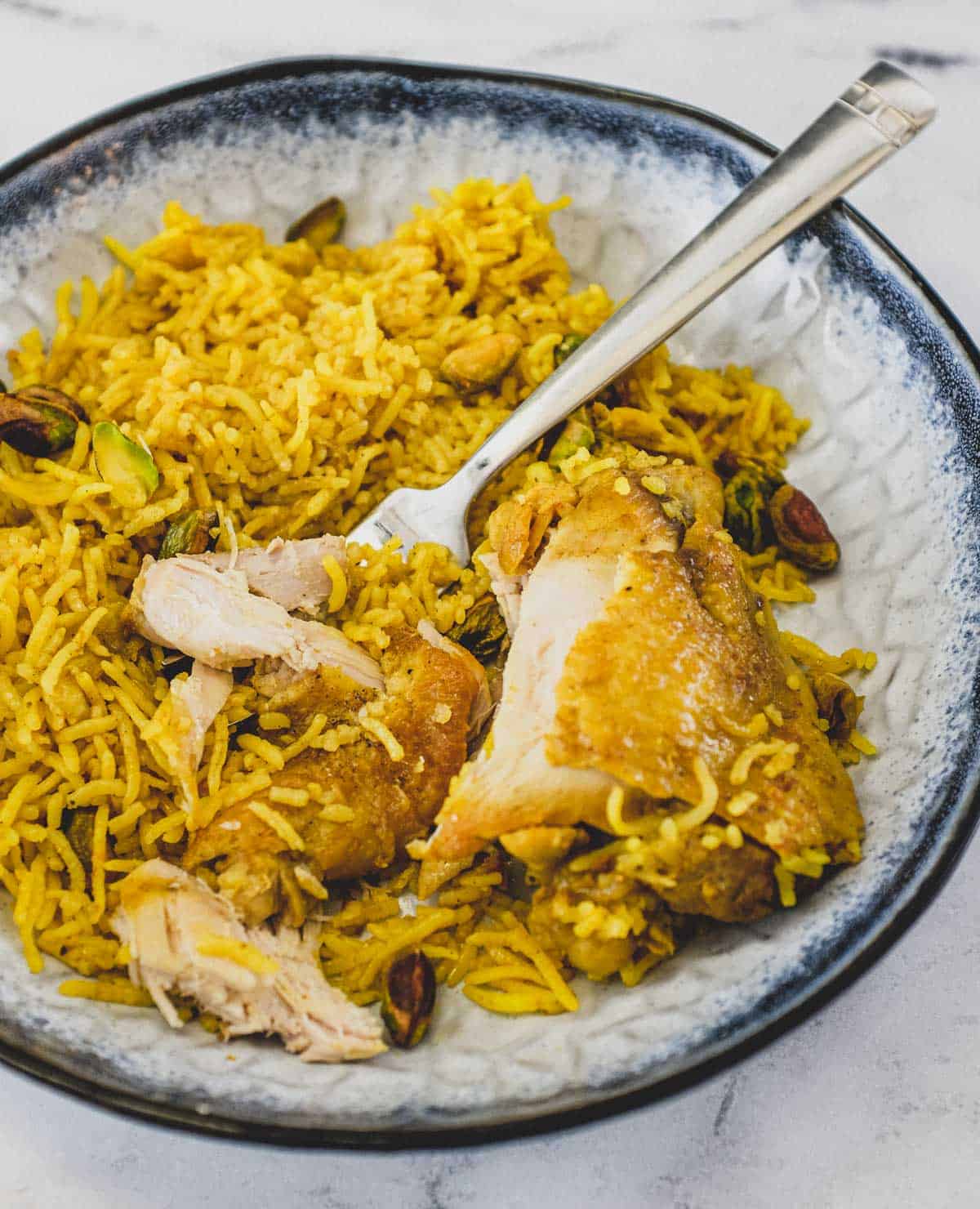 What to serve with chicken pilaf

A good pilaf with chicken is completely fine on its own - that's the point really - but I do like to serve a bit of greenery with my food, so I'll generally pop a salad on the side. A great salad to serve is the Lebanese Fattoush salad - lots of green, lots of texture and a wonderfully sour, zingy dressing. Perfection! You could also serve an Iranian Shrirazi Salad.

If you like this recipe, you may also get a kick out of some (or all) of my other delicious rice recipes. Check out my best rice recipes too. 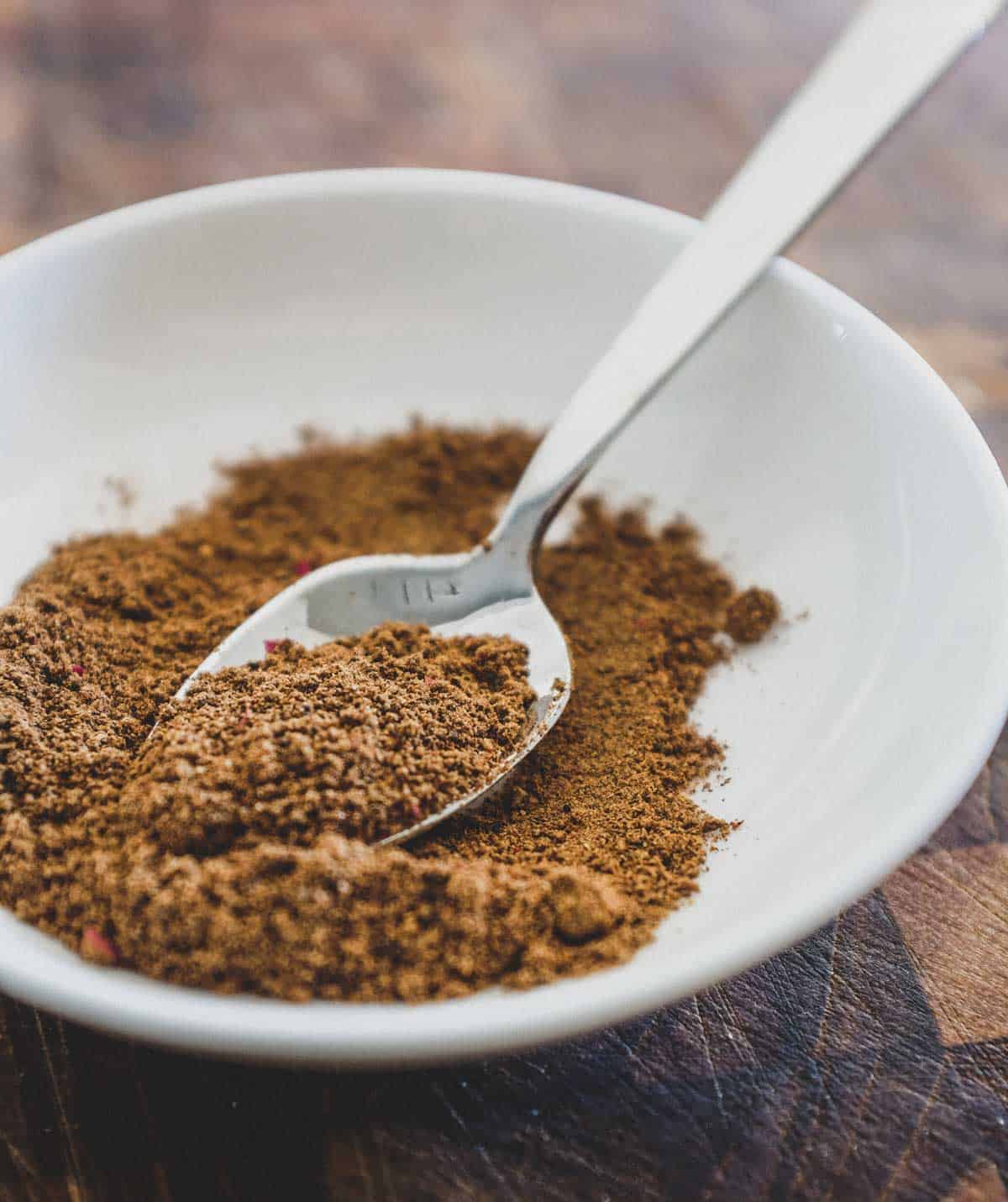 What is Baharat Spice Mix?

You can buy baharat online but if you have all the whole or ground ingredients, making your own at home is easy. Simply dry fry the whole spices and then using a spice grinder or pestle & mortar, grind them into a fine powder. Combine with any ground spices and that's it.

It's a great spice to have to add to soups, stews or to marinate meat in for a truly Middle Eastern fragrance and flavour.

Dry fry the whole spices then grind into powder. Combine with powdered spices. Keep in an airtight container for up to 6 months.

How to make my Chicken Pilaf 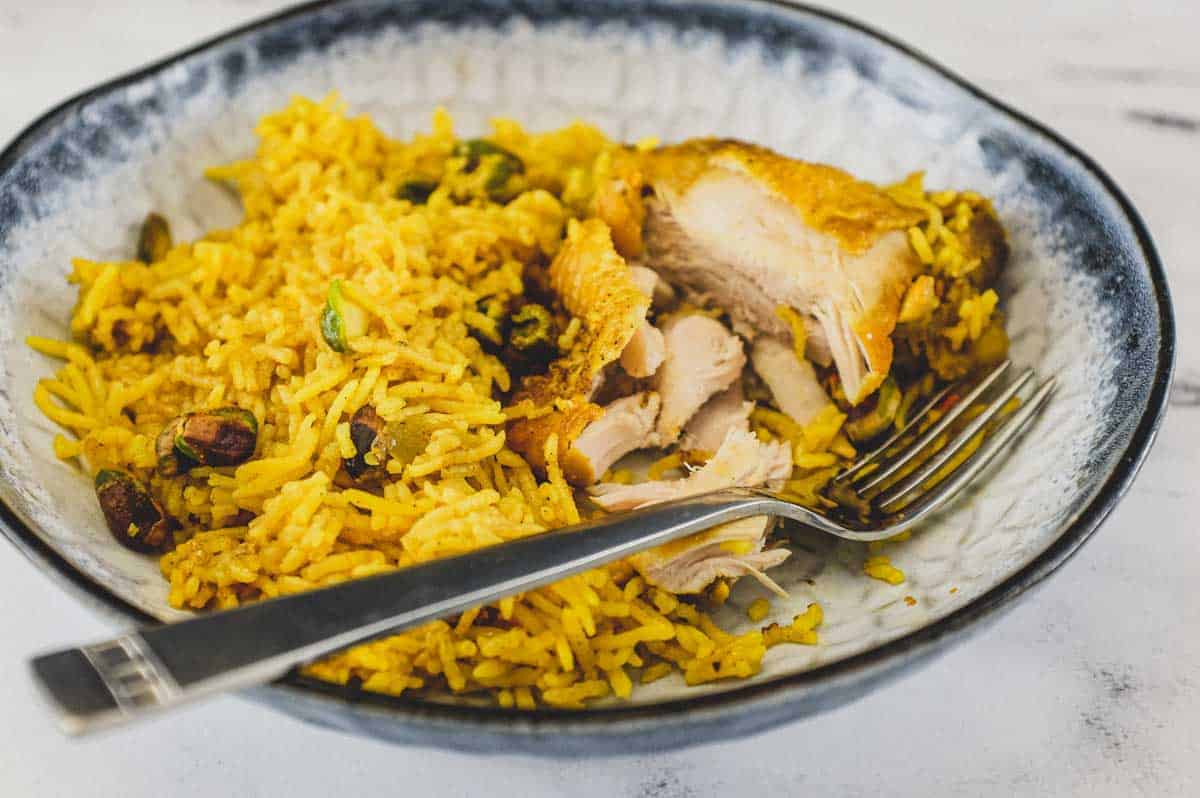 Did you make my Chicken Pilaf?