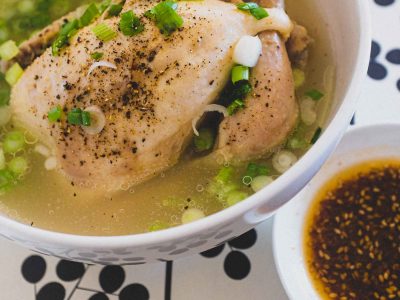 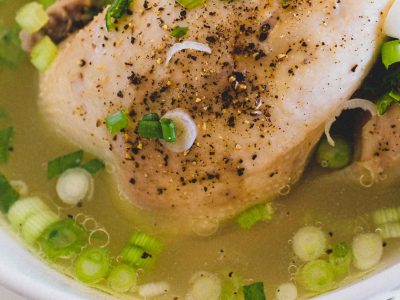 A whole chicken in a soup!? This is the deal with this classic and much-loved Korean soup. A deliciously fragrant and filling dish that’s perfect any time of year, but especially in the height of summer. Learn all about Samgyetang (and how to make it yourself) here… 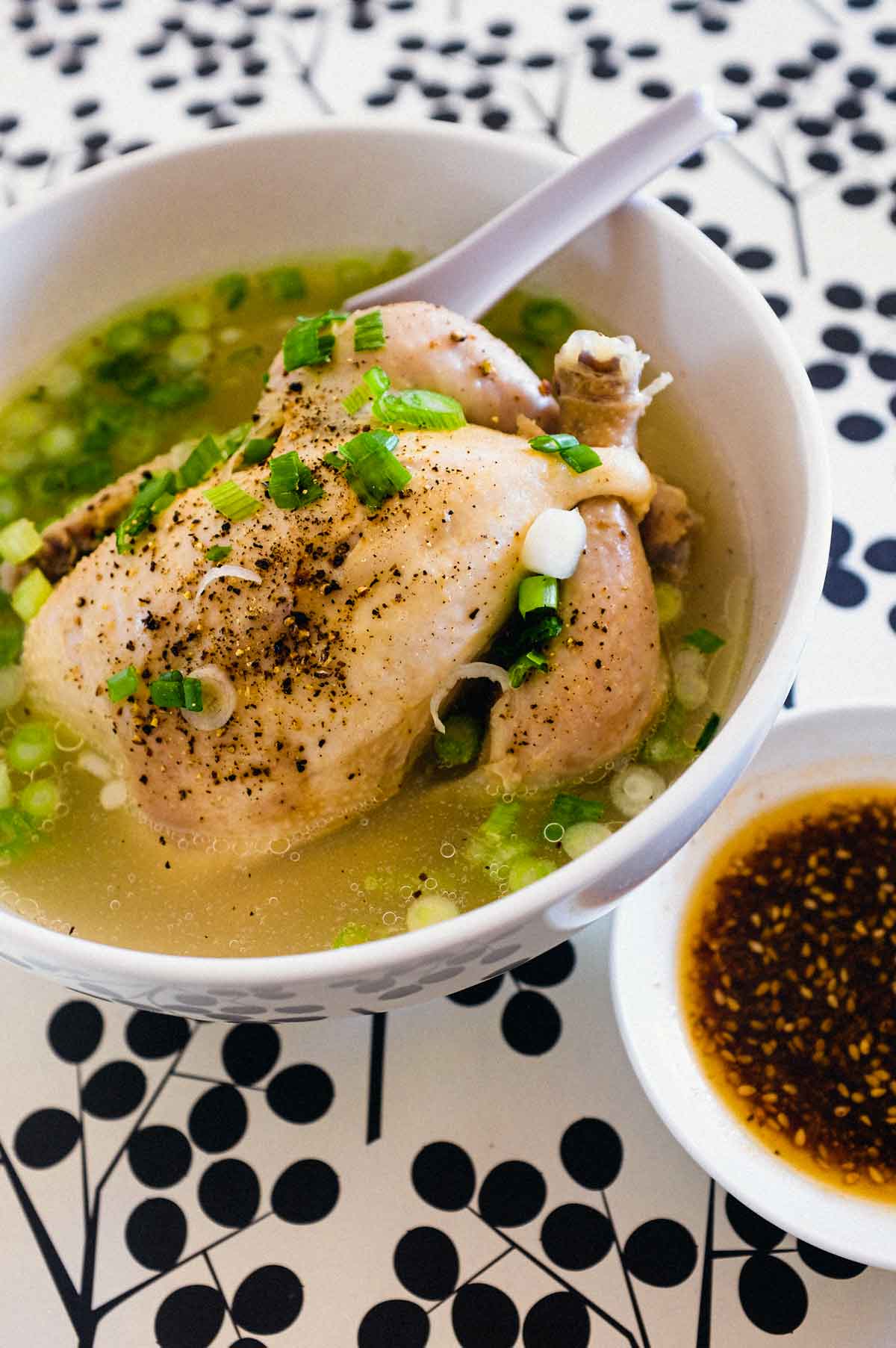 I first ate this amazing Korean Sangyetang (Ginseng Chicken Soup) on a day I really really needed help! I was having a lovely weekend in L.A. and had been out the night before and had partaken in a fair few wines, cocktails and beers in the bar downstairs in our hotel. This led me to become a little too comfortable in my consumption as I knew I didn't have far to go for bed. The next morning, to say I was delicate would be an understatement - I could barely lift my head. After many hours groaning and guzzling water, we finally felt ready to face the glaring summer sunshine. We were also ravenously hungry.

It was the height of summer and, while not as horrifically hot as Vegas (where I live) it was still too much for my fragile state. I needed shelter and food fast - and right there, across the street was a Korean Restaurant. "that will do!" I exclaimed.

Upon arrival, I was informed that there was a special dish that day - Samgyetang, a Korean chicken soup eaten during the summer months. Most people associate a hearty chicken soup with winter, but I discovered that Koreans eat Samgyetang three times a year (the boknal) - at the beginning, middle and end of summer. They like to fight 'heat with heat!' apparently.

In all honesty I was unfamiliar with ginseng, but we were shown a picture by the waiter and this chicken ginseng soup featured a whole chicken per person! This knowledge had me across the line, so I ordered a bowl.

I've long been a fan of soup with a hangover. I used to be of the school that something fried will sort you out, but learned over the years, that fluid replenishment is way more effective and actually returns LIFE to the weariest of bodies in crisis. Japanese Ramen, Vietnamese Pho, Chinese Noodle Soup and Malaysian Laksa are all my go-to soups when I'm struggling. 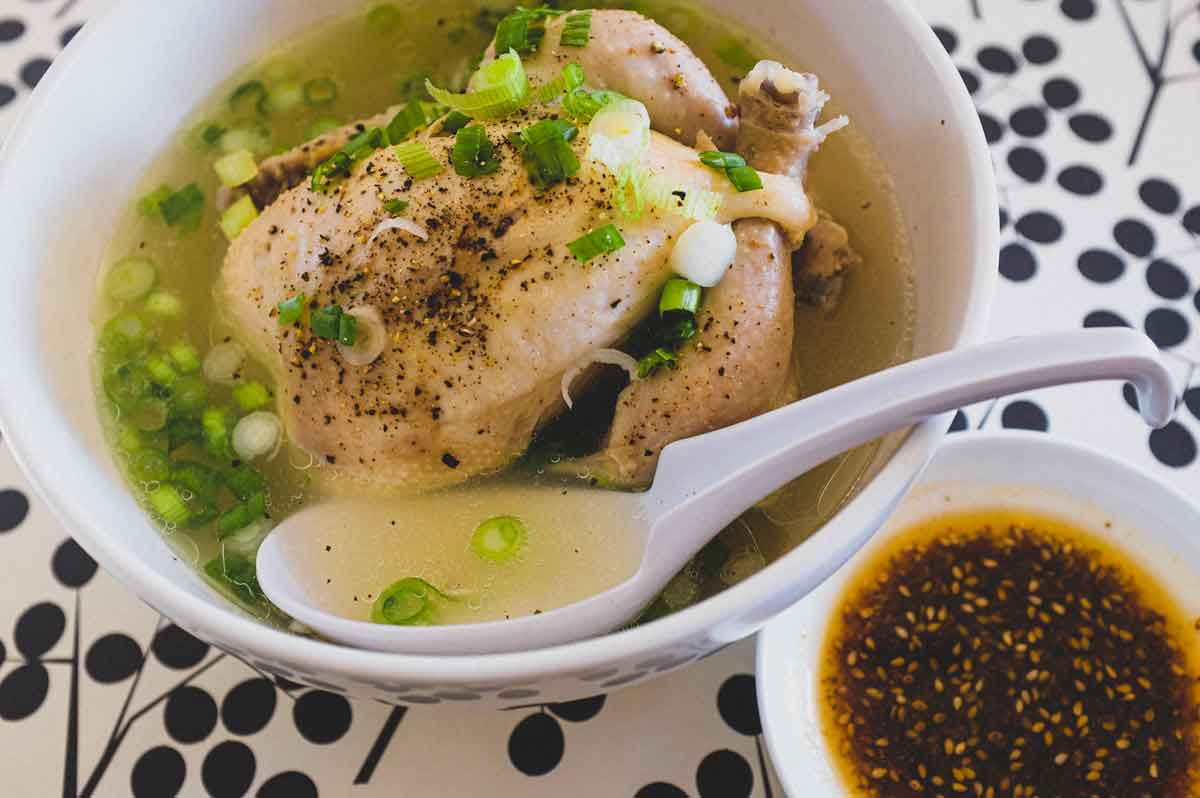 For those, like me who were in the dark, ginseng is a root of the Panax plant. Panax, has the botanical translation of 'all healing' in Greek, but it is Asia that it has been used in traditional medicine for centuries. In particular, China and Korea use the root in medicines and as an ingredient in food. Ginseng is said to aid health in countless ways. Benefits are said to include boosting energy, lowering blood sugar levels of those with diabetes, heart health, cancer prevention, those suffering a cold or flu and it's even believed to be an potent aphrodisiac. It’s quite the superfood!

It can be used as medicine, but also as a cooking ingredient, either fresh or dried.

A soup for LIFE!

Back to my hangover! When the soup was finally presented to me, I couldn't have been more excited. It's a very simple looking affair - a mini chicken (Cornish hen) sits, bathed by broth - rice is stuffed, with garlic, into the bird and the whole thing is sprinkled with fragrant spring onion. From my first tentative slurp I was won over. It's difficult to pinpoint an actual flavour. What does ginseng taste like? I'm not sure is the honest answer - there's definitely an earthy quality, but also a slight bitterness. Our soup had a little bit floating, which I tried and it wasn't super delicious in isolation. The broth however was another story! Once melded with all the other ingredients the big picture taste is a light, fragrant delight which is actually quite a revelation. The soup saved my life that day, and from that moment was most definitely on my 'to investigate further' list. 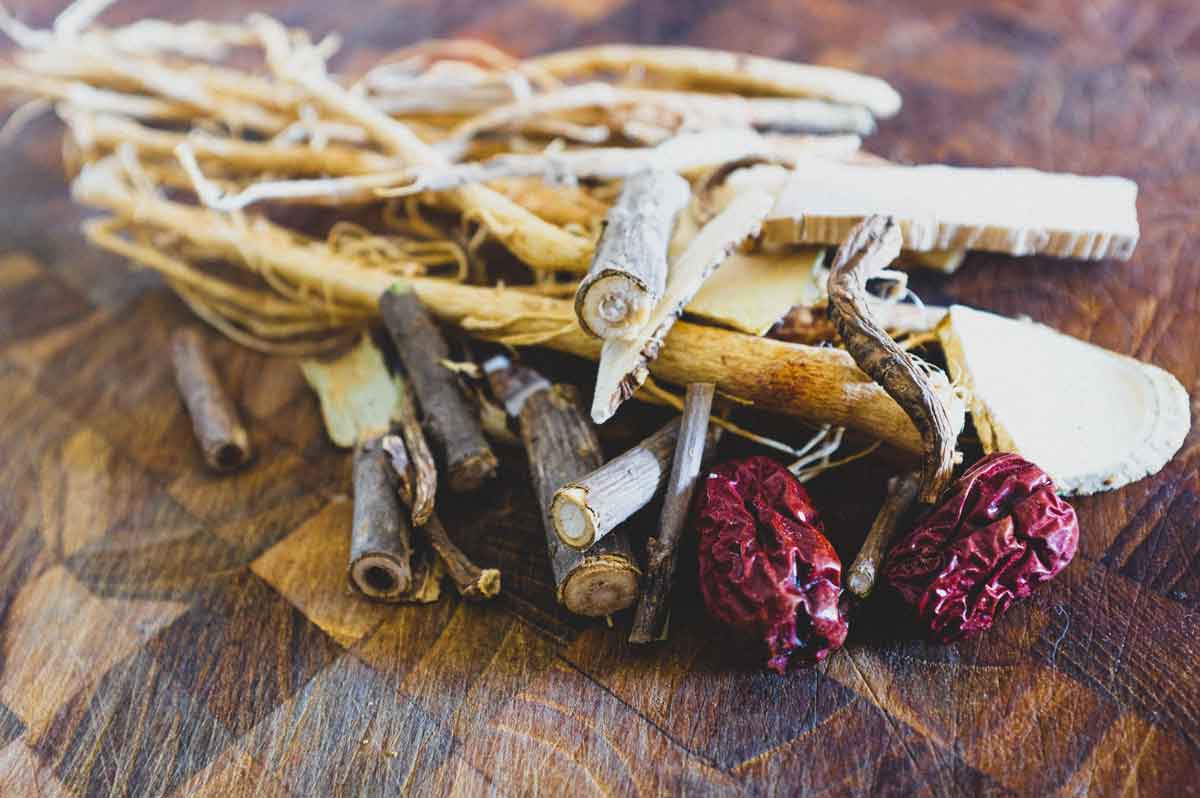 Making Samgyetang at home - Get the Soup Kit!

Upon research I discovered the ingredients of Samgyetang are ginseng, jujube (dried red dates) and various other dried herbal bits and pieces. I decided to create a version at home so I went on a shopping trip to one of favourite places, the Korean supermarket. While there, I began filling my basket with ingredients. All the packaging was written in Korean, so I was using my 'very helpful' Google translate camera feature which translates live when pointed at words. I pointed at a mystery package on a shelf and Google announced "Experience the delights of rejection!" - hmmmm! I thought - not sure this is the ingredient for me.

Mid way through my trip, a tiny Korean lady wearing a tiny fascinator with veil approached and asked in an excited tone "Are you cooking Samgyetang!!?".

"I am!" I replied. She was overjoyed by this prospect! Then, in a unspoken, friendly gesture, she began removing ingredients from my basket, popping them back on the shelf. She led me to another area, took a packet and handed it to me. "THIS has everything you need for delicious Samgyetang!" The packet was a Samgyetang soup kit and contained an array of twigs and wooden chips (think forest floor) along with the traditional jujube and ginseng. She saved me about $30! 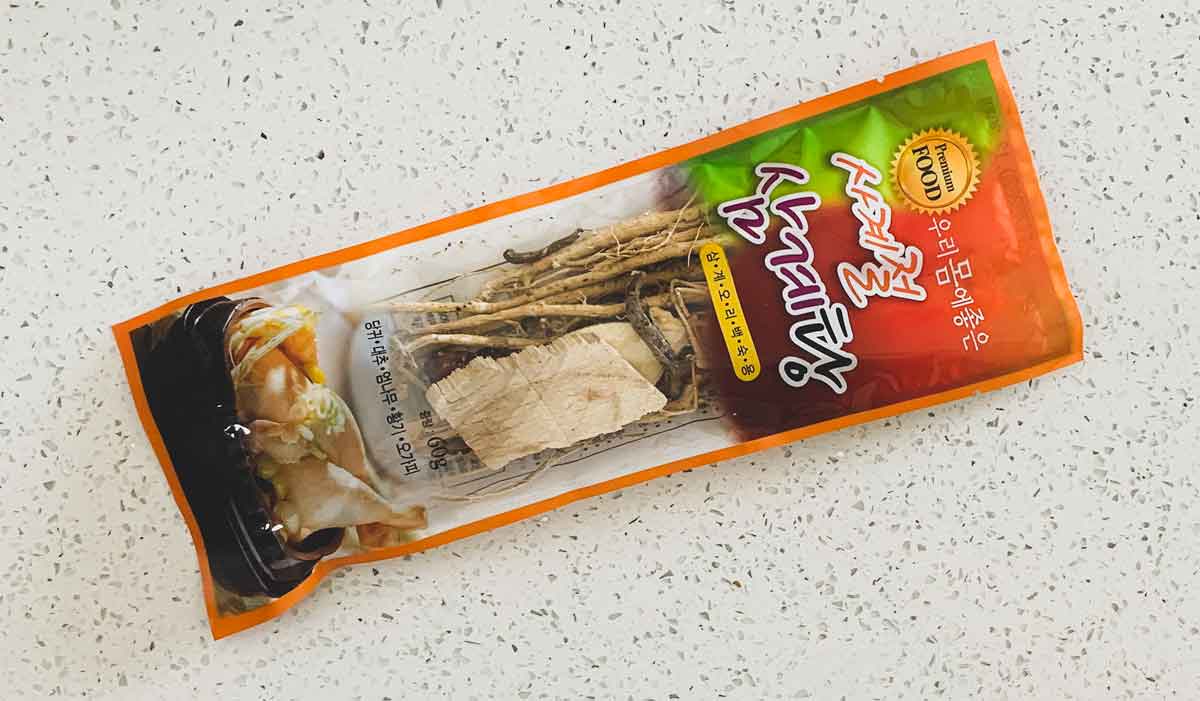 My new little friend subsequently gave me her own recipe for samgyetang and a bonus guided tour of the supermarket with lots of other suggestions for home cooked dishes. I wanted to adopt her as my new Korean mother, and think that maybe she would have been down with that.

Samgyetang is super easy to make at home, the trickiest it gets in stuffing the birds and sealing them - but if my chubby fingers can manage then anyone can! Watch me try to edit my struggle on the video below! My version of the soup is identical to the one I'd eaten in LA. If you're wondering where to buy a Samgyetang soup kit, you can buy at many Asian or Korean markets or also online.

The soup is pretty much self-contained but I made a simple dipping sauce to dunk the chicken into, to add a salty, sesame hit. It's pretty amazing! This soup is a real winner, any time of the year - but especially in summer - especially the extreme Vegas summer. It's on my hot list for sure, but not sure I can limit to only eating three times - I could eat it three times a week! You should try this soup once in your life! That said, if you DO want something fried for YOUR hangover - look no further than the king of fried rice - kimchi fried rice with a fried egg. LIFE on a plate!

How to make my Korean Samgyetang (Ginseng Chicken Soup) 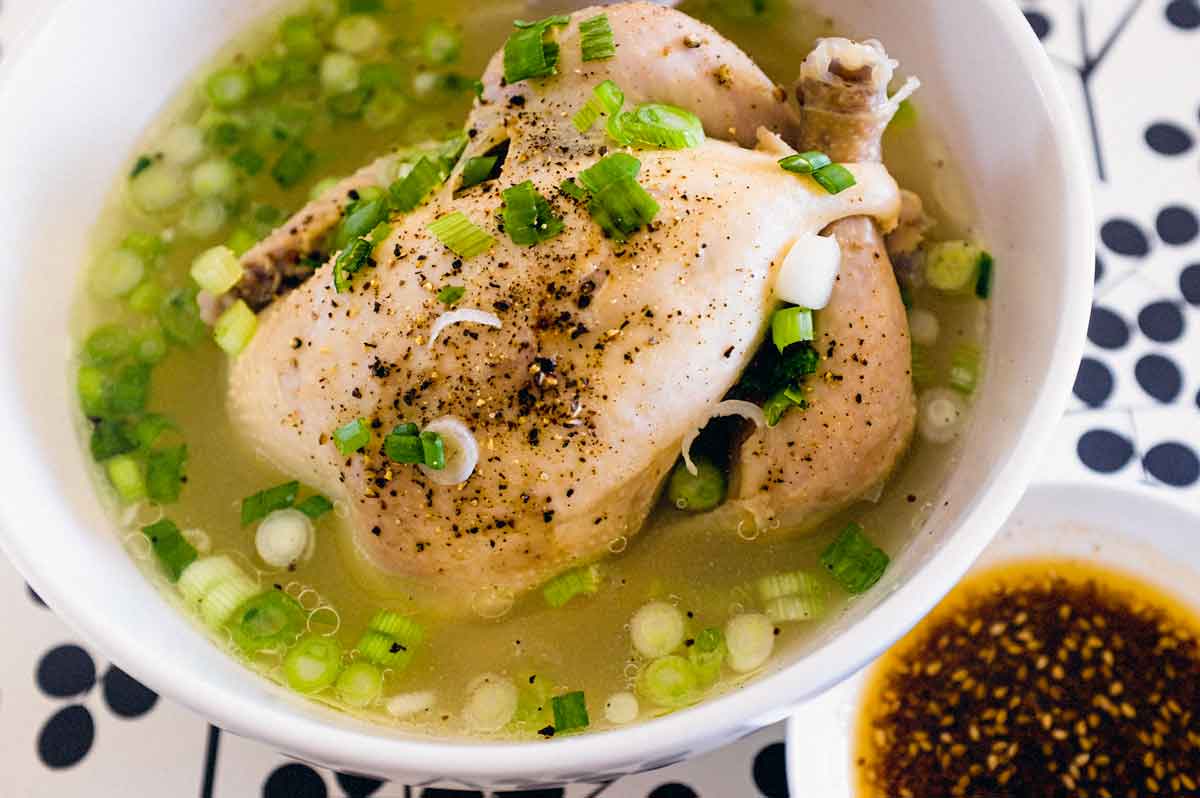 For the dipping sauce

While the chicken is cooking - make a dipping sauce

You may have broth leftover, simply poach a chicken breast and pull apart into strands to add, or use leftover roast chicken to add to the broth.

Did you make my Korean Samgyetang (Ginseng Chicken Soup)?