Saag Aloo (or Palak Aloo) is a wonderfully flavourful vegan dish of potatoes with spinach in a mild, spiced sauce. A taste and textural Indian sensation. Learn how easy it is to make at home. 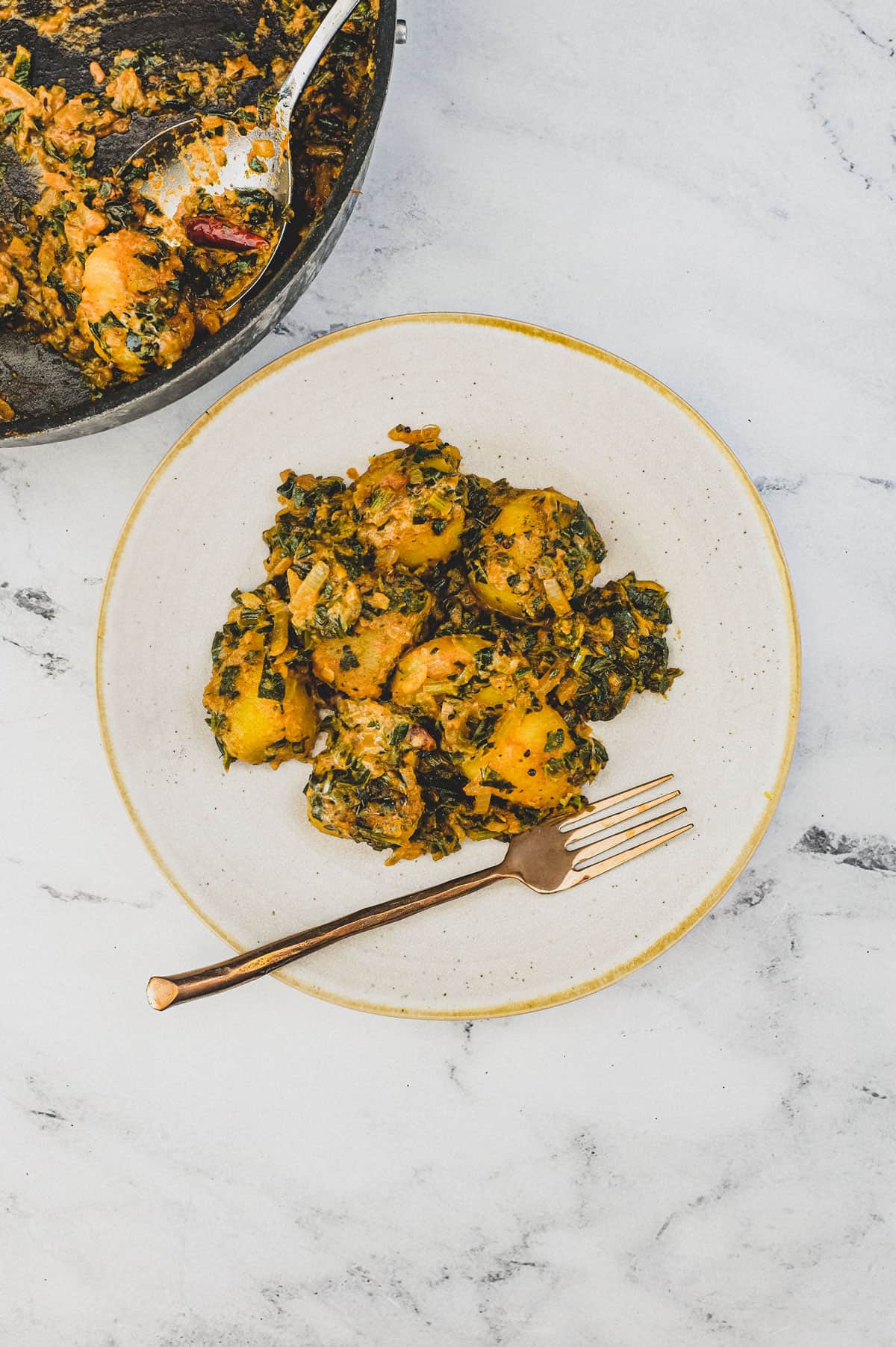 Indian food is amongst the greatest cuisines in the World if you are vegetarian or vegan. I am neither, but I often forego meat or fish in favour of a fully plant-based feast. There's no better cuisine to achieve this than Indian. And one of my favourite dishes that always makes an appearance is Saag Aloo.

What is Saag Aloo?

Most people assume saag means spinach, but in fact the word saag simply refers to leafy greens. These greens can come in many forms from collard greens, kale, mustard greens, fenugreek leaves (methi) amongst others. In this recipe, we use the most common of greens, spinach. In Hindi, spinach is called 'Palak', so if you see the dish 'Palak Aloo', you'll know it's the same thing.

Next up, 'Aloo', which is less ambiguous and simply means 'potato'.

When we combine the creamy, soft potatoes with the earthy iron-rich spinach we reach dizzying heights of flavour and texture. This combination is one of my favourite Indian dishes, period. I'm a huge fan of potatoes to start with, but prepared this way they're elevated and really something quite special. It's hard to say which is the hero in this dish, but I'm going with potato!

This saag aloo is a simple recipe to make at home. A few easy steps to flavour greatness. Let's break those steps down a little - and be sure to get the full recipe below.

I like to par-cook my potatoes as they end up with a better texture and are less likely to fall apart in the sauce. Buy a waxy style potato and cut it into chunks (about the size of a ping-pong ball). I cover them in water, and sprinkle in some turmeric (for colour) and salt and boil them for 12 minutes until almost cooked. I then take them out and fry them in a little oil (I use mustard oil for even more flavour) - this helps seal them, making them a little more robust in the sauce.

Step 2: A spiced onion base

Like many curried dishes, whole spices are added to oil before frying onion, this adds a level of flavour and depth to the final dish. In this recipe, as the dish is Bengali Inspired, I add a little Panch Phoron spice mix. Learn how to make your own panch phoron with my simple recipe.

This is not a spicy curry and I like to add milder, earthy spices to create a warm, full flavour without chilli-heat taking over. You can use a hot or mild chilli powder to dial up the heat to your taste. I use Kashmiri chilli powder as it's typically very mild. I'll often use paprika instead - in addition, cumin, coriander and garam masala are added to the mix. Finally, a little tomato goes in to help bind, add colour and a little sweetness too.

Lastly, I'll return the potatoes to the pan, along with the spinach. I mostly use chopped frozen spinach for curries as it's super convenient. Obviously, you can also use fresh - just add 1-2 packets (chop it a bit first).

And that's it! 10 minutes later we're good to go - be sure to check your potatoes for doneness and reduce the sauce enough to that it's thick and creamy and clings to the potatoes. At this stage, I often drizzle over a little cream, if you're vegan use coconut cream - it adds a luxurious note to the finish and helps with the texture. I'll also sprinkle over a MAGICAL ingredient - Kasoori Methi (Dried Fenugreek leaves) which add the most amazing fragrant finish to the flavour. Hunt it out, it's one of my favourite Indian flavours. 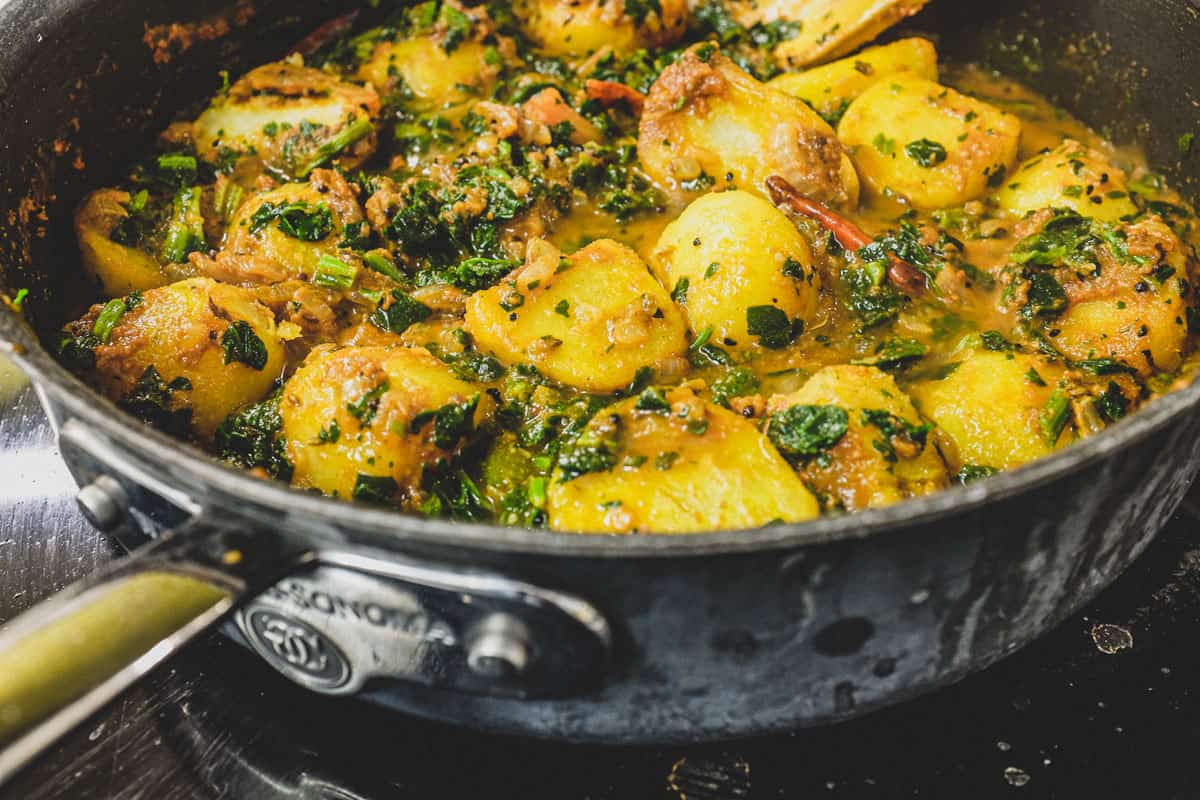 For MY Indian feast, I'll serve a bunch of dishes alongside copious amounts of rice or Indian breads or BOTH. Here are some of my favourites:

How to make my Saag Aloo (Spinach & Potato Curry) 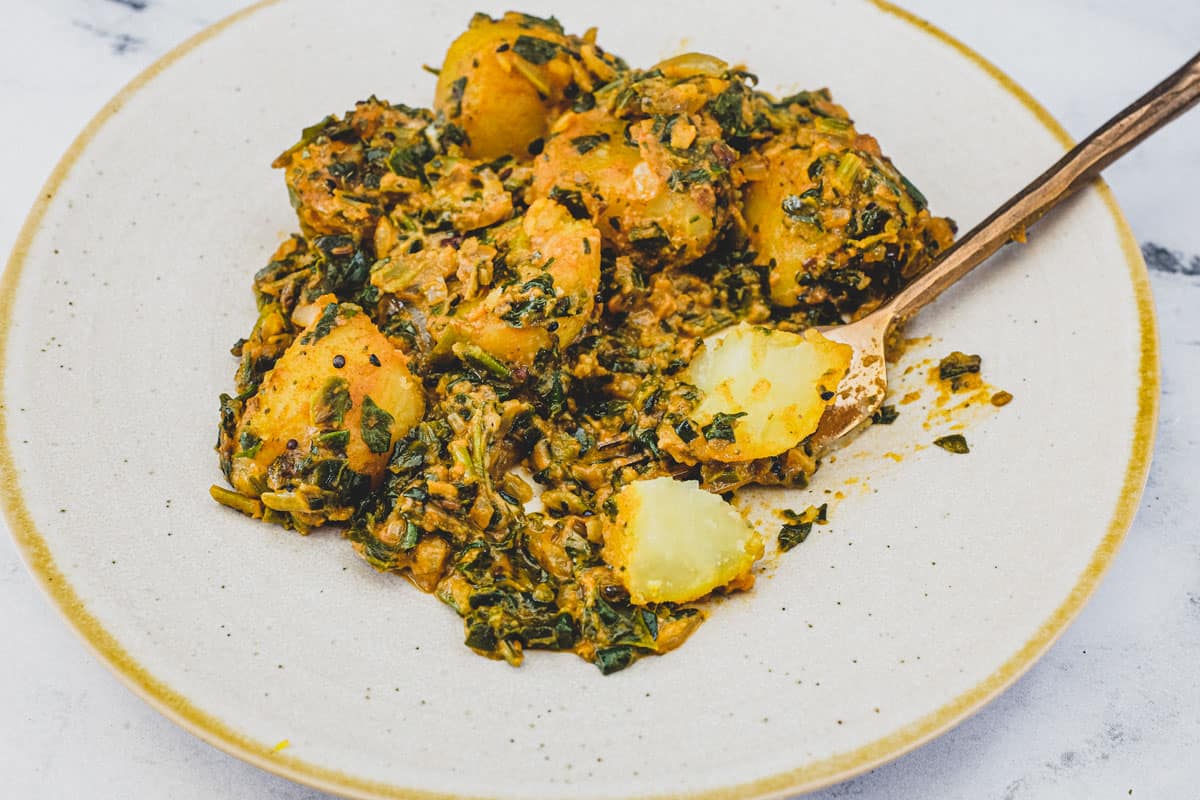 I love this dish served with Indian breads like roti, paratha or naan. Even better if you can master the art of Indian poori/puri! I am yet to. It's also pretty delicious with rice of course.